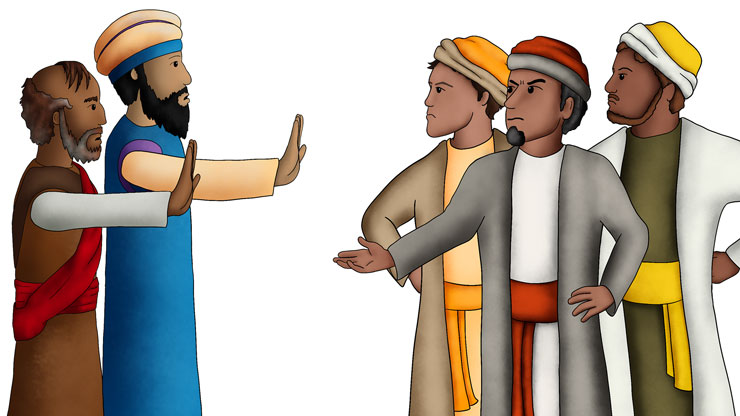 Say “No” to the Pretenders

Zerubbabel & Jeshua : Say “No” to the Pretenders

Zerubbabel and Jeshua had been leading the people, helping them rebuild God’s House. The foundation was already laid and God’s Family was hard at work.

Remember way back when God sent lions into the mix because of the people’s idol worship and divided hearts? Those people worshiped any and every false “god” and idol they wanted and did not keep themselves set apart ONLY for the One True God. Well, they taught their children to live like that too, and those children were still living in God’s land.

One day these divided-hearted people came to Zerubbabel and Jeshua and said, “Let’s be friends! We want to help you build the House you’re making for God. We worship your God too, you know.”

But since they had just mixed in some of God’s ways with their own wicked ways, they didn’t worship God for real. They were just pretending and trying to sneak, sneak, sneak into the middle of God’s Family and God’s Work. Not good. Booooo!

Could it be that some people heard that those folks wanted to help and didn’t see how dangerous it was? Maybe they thought, “Great! More help! That will mean we won’t have to do as much of the work ourselves. That will make the work easier and faster.”

Or, “The more the merrier! I like being with lots of people.”

Or even, “The more people who join our City, the stronger we will be. And the more money we will have for doing God’s work.”

Those thoughts could sound kinda like good reasons, couldn’t they? But God does not see things from those brain only ways of thinking.

Do you remember how Ezekiel had seen those gateways of God’s House? The entrances and exits — the doors in and out. And remember how God had shown Ezekiel that those doorways were very important? That’s because you can’t just let anyone come in and out of God’s House. If anyone can just come in and out whenever they feel like it, the House won’t be Holy anymore. And God said Holiness was His “number one rule for His House,” didn’t He?

Holy means, “set apart as special for only God.” So if divided-hearted, idol-worshipping people were allowed in, how could God’s House stay Holy for God alone?

Zerubbabel and Jeshua were very wise (and good shepherds of the people). They understood what God thought about these divided-hearted pretenders trying to “help.”

Zerubbabel said to the enemies, “No way! You cannot come in and help us.”

This made the pretenders very angry. Their plan had not worked! So they decided that if they couldn’t help build, then they were going to try to make it hard for anyone who was building.

The pretenders wrote a letter to the king. (By now there was a different king than the King Cyrus who’d helped them go back and rebuild.) The letter said, “King, these people in God’s City, Jerusalem, are rebuilding the Temple of their God. But they are troublemakers. If they keep building, they will get stronger and stronger. Then they might try to fight you and stop paying you money. You don’t want that to happen! So you should make them stop building.”

Sadly, the king listened to those sneaky pretenders. The king didn’t want God’s City to get strong and powerful again, so he made a rule that said, “No more build, build, building in God’s City.”

That made God’s People who were building afraid. So the people started making excuses for themselves. Their muscles did kind of hurt. “Maybe it was a good time for a rest since it was the king’s orders,” they thought. And one by one, they stopped building. Not good.

Don’t you think God would have taken care of them and helped them build through all the tough times if they had trusted Him and kept on doing His Work, Work, Work no matter what? Of course! It was GOD’S House they were building.

But, once again, God would need to send someone to help get His Children back on the right path.