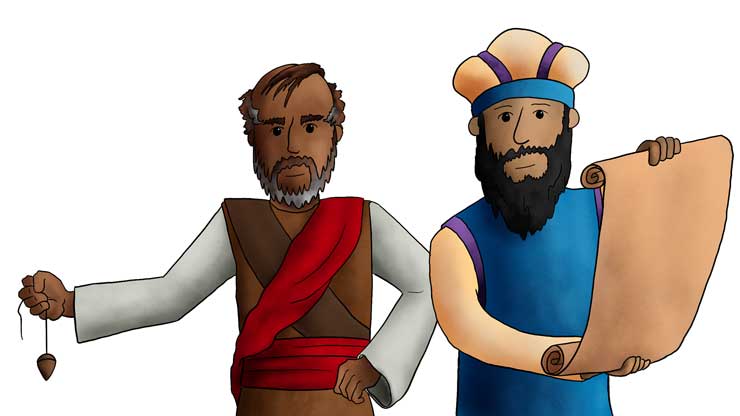 Returning Home to Rebuild the House

God’s Children had been scattered to other lands. God’s land, their land, was a ruined, burned-up, broken-down mess. I’m sure you remember that God had told His Heaven Seers beforehand that all this would happen. But, He also told them, through Jeremiah and Isaiah, that their discipline would only last 70 years, and that a man named Cyrus would do something special for God’s Family.

Un-Surprise! Un-Surprise! The nation of Babylon had now been conquered themselves, and now there was a new king ruling the land (just like God had told Jeremiah and then Belshazzar)! Can you guess what his name was? Cyrus! And this new King Cyrus was about to do something very unexpected!

Cyrus the Persian king told all the children of Israel, “Your God is awesome! He gave me all this land to rule, and He wants to have a House again in Jerusalem. So, any of you Shining Survivors who worship God, if you want to build God a new House, you can go back home to His City, Jerusalem. And by the way, these survivors should be helped by their neighbors giving them silver and gold and everything they need.”

(Does that remind you of something? It reminds me of when Moses led the Israelites out of Egypt, and God had the Egyptians give the Israelites all kinds of treasures as they left!)

Not only did King Cyrus say they could go back to Jerusalem, but he even gave back all the special things that belonged in God’s House (things King Nebuchadnezzar had stolen).

Un-Surprise! Un-Surprise! God keeps His Promises and takes great care of His Children and gives them everything they need to do what He says.

It was finally time to go home, home, Home to Zion! Once again, God made what looked impossible, totally possible.

One Israelite man who would be going back home to Zion was named Zerubbabel. But he wasn’t just an Israelite. Zerubbabel was actually the heir to the throne of David! That means that if God’s People hadn’t been conquered by Nebuchadnezzar, Zerubbabel would have been the king of Judah! God’s Family respected Zerubbabel — a descendant of David. Zerubbabel cared very much about God and His House. When he heard they were going home to Jerusalem, he was so excited.

Another person who was excited about returning to rebuild God’s House was Jeshua. He was another leader of God’s Children. He was God’s high priest — a descendant of Aaron.

Together, Zerubbabel and Jeshua started gathering some of the Shining Survivors of God’s Family to head on home. It was time to rebuild God’s House.

They packed up their things and started for home. There were thousands of them — men, women, children, priests, singers, as well as all their horses, mules, camels and donkeys. They had waited many, long years for this day. They eagerly walked, walked, walked, looking so forward to being in Zion again and building God’s House.

But once they got to Jerusalem, they were a little bit surprised. It looked an awful mess. But the very first thing they did was rebuild the altar and offer gifts to God.

Then they got to work — starting with the foundation for God’s House.

Do you know what a foundation is? A foundation is a hard, flat, rock area to build the house on. Without a strong foundation, the house would go squishhhhh, squish, squish down in the dirt and mud. The walls would start to crack and lean and eventually the whole house would come crashing down. So before the building of God’s House could start, the foundation had to be laid.

These people who had survived the 70 years of discipline so that they could journey back to Zion and work their little hearts out, did just that. They worked really hard.

When the foundation was finally finished, it was a big deal!! Yay! The people started shouting like you wouldn’t believe. Their voices got louder, and louder, and louder. They were praising God at the top of their lungs. You could hear them for miles.

But the sound wasn’t just happiness. Some of God’s Family who had seen Solomon’s Temple way back before it was destroyed, were actually crying. They wept, loudly, because this foundation wasn’t looking as big and beautiful as the first one that Solomon had built. And God deserved Big. And God deserved Beautiful! So the sound of their weeping and the sound of their joy combined together to create one very special worshipful gift for their Father in Heaven.