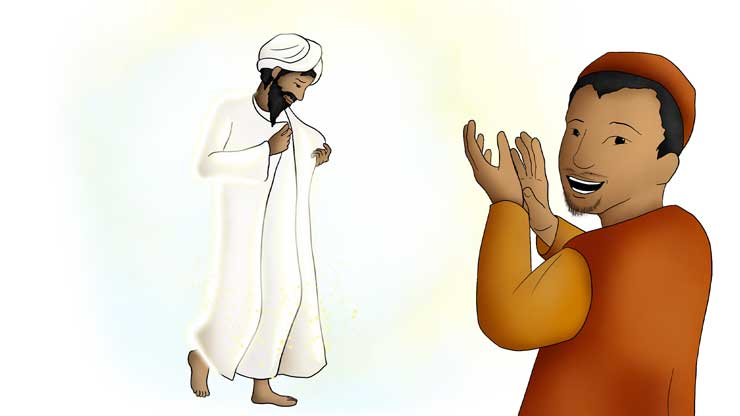 Then through an angel messenger, God showed Zechariah many wild and amazing things in the unseen world. Like four horses that rode through the earth on patrol, and a flying scroll, and a woman in a basket.

But right now I want to tell you about the time Zechariah saw something else in the unseen world: a man holding a measuring line. When Zechariah saw him he asked him, “Where are you going?”

The man answered, “I’m going to measure God’s City to see how wide and long it is.” Then he started to leave. But before he had gotten very far, another angel met him and said, “Run and tell that little fella Zechariah, ‘God’s City will one day grow to be so full of people and cattle, that its protecting wall of stone won’t be enough. So instead, I Myself will be a protective wall of fire around it. And I Myself will be the glory inside it.’”

“Shout and be glad, Jerusalem. I am coming, and I will live among you. People from many nations will join with Me and will become My People.”

Then Zechariah saw Jeshua, the high priest, standing in front of the angel of the Lord. Jeshua was in filthy clothes. And I don’t mean muddy clothes. The Bible says his clothes were covered in poop. And Jeshua was an adult, not a baby, so this was not okay. Most importantly, God had given the high priest rules about washing up and being CLEAN before God! Poopy priest clothes were NOT okay in God’s Deal of rules. It was Unclean, Unholy.

Zechariah also saw that in the unseen realms, standing next to Jeshua was — satan! Satan was getting ready to accuse Jeshua and tell Jeshua what a filthy, terrible, rotten, worthless person he was. (Mean satan likes to do that.)

But just before satan could open his big mouth, the Lord said to satan, “The Lord says NO to you, satan! The Lord who has chosen Jerusalem says NO to you!

“This man was like a burning stick that *I* snatched from the fire. So, satan, you may not say a word. Silence!”

Someone might say that satan was “right” about Jeshua. Letting his clothes be all poopy was, well… bad. It was Dirty. Defiling. Sinful. Especially since he was the high priest! He really wasn’t supposed to let himself get all dirty like that. But God was showing Zechariah another puzzle piece — a New Covenant Deal was coming. A Deal where if you are “a stick God snatches from the fire,” then satan has NO right to accuse you and tell you how bad you are.

The angel told the others standing there, “Get those filthy clothes off Jeshua.”

Then he turned to Jeshua and said, “Look, I have taken away and forgiven your sin, and I am giving you beautiful, fancy, brand new clothes.”

Then the angel of the Lord said to Jeshua and the others, “These are symbols of what will happen in the future. I will send My Servant (Jesus). And in one day, I will take away the sin of this land.”