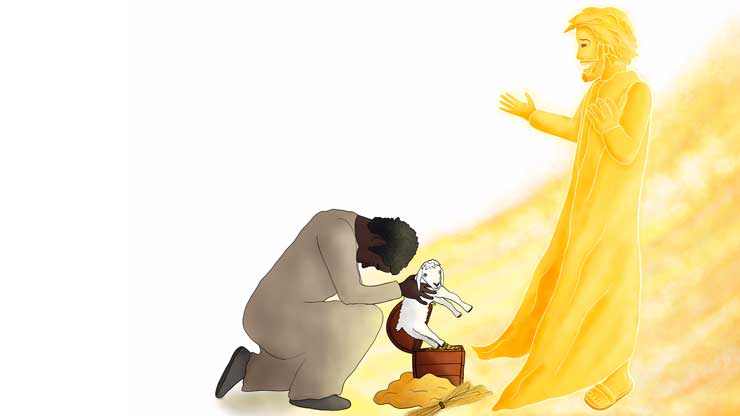 Don't Hold Anything Back

Try Me : Don't Hold Anything Back

Sometime around the time when Nehemiah went back to Persia, the people living in Jerusalem started getting themselves in trouble again.

Do you remember how God asked His Children to give certain things to Him? Like a part of their money, harvest and other stuff? And how they were to offer sacrifices? Do you remember that?

Well, instead of giving God all He asked for, they would give less than He said, or sometimes nothing at all.

And instead of offering their best gifts to God, they started giving Him broken things. They were bringing sick or crippled or even stolen animals as sacrifices!

And worst of all, when God tried to help them turn around and change, they just talked back with excuses.

A man named Malachi, one of God’s servants, tried to help the people by telling them that they’d been arguing with God by going back and forth, back and forth with Him. Malachi told them,

“But you people argue back, ‘How have You shown You love us, God? We don’t feeeeel loved.’”

(Ohhh… That’s very mean, isn’t it? That had to hurt their Father, God, who had done so much for them.)

“And God answers, ‘How have I shown My love? I picked you to be Mine! I chose you way back when I picked Jacob, and not Esau. Even a son learns to respect his father and a worker honors his boss. I’m your Daddy but you don’t show Me any honor. I’m your Good Master, so why don’t I get any respect from you? You have shown you hate My very name.’”

“But you people argue back, ‘Us? How did we hate Your name, God? We offer sacrifices and we obey the rules. We don’t understand, God.’

“And God answers you, ‘Uhhh! Your sacrifices are like dog-poop on a plate.’

“And you people argue back, ‘What are You saying, God? HOW did we do that? We’re not that bad. We still don’t understaaaaand.’

“And God answers, ‘When you offer Me blind or lame or sickly animals, is that not wrong? Try offering them to your president or governor! Would he be happy with you? Would he accept you? I wish you would just close the doors to the religious building and stop all your religious rituals because I am NOT happy with you and I will no longer accept the gifts you offer.’”

I have to stop and ask you children a question. Do you see how the people are wrong in how they’re treating God disrespectfully by bringing Him sick and stolen animals as a “gift”? That’s not hard to understand, is it? That’s terrible. Yet the people keep acting like they don’t understand why God is even correcting them.

They’re acting like it’s “good enough” to just give God “any old little something.” And that’s not how a relationship with God works. He’s God. And if God asks you for something, then you give it to Him. And not on your own terms and in your own way. You give Him exactly what He wants. So this is not hard to understand. God had asked the people for something and they weren’t giving it to Him. And the people decided to just feeeeel confuuused about it instead of obeying. But you can’t fool God.

Have you ever felt in your own heart anything like that? Where you know that God or your parents are wanting something more or better from you, but you aren’t really wanting to give it? Like if they say, “Please give your little sister the red block.” And you give her a blue block. And when you get in trouble for that you pretend you don’t understand and say, “How did I disobey? I gave her a block. The blue one’s just as good as the red one. I don’t understaaaaand…”

That’s garbage. Don’t do that, okay? You aren’t fooling anyone but yourself. We always need to give God exactly what He asks for.

“Nations all over the world will one day honor Me, for My Name will be great throughout the earth. So I cannot let you keep dirtying it. You are the people who wear My name, so you dishonor My name just by the terrible things you do. You do things that are wrong and say, ‘It’s alright.’ And you say, ‘We’re just tired of doing what You ask. It’s too hard.’

“And you come crying to Me with your offerings, acting like you are soft-hearted, but at the same time you’re doing things I hate. Like breaking your marriage covenants. Ohh! I hate divorce.”

Malachi warned the people, “God is getting worn out by all your talk.”

But you people argue back, “How have we worn Him out?”

Malachi answers, “You have worn Him out by saying that wrong is right and that God is pleased with just anyone.”

God says, “I don’t change. I don’t break My promises (like you have). Come back to Me and I will come back to you.”

But you people argue back, “How can we come back, when we never left, God?”

And God answers, “People shouldn’t cheat God, but you have cheated Me! You’re taking from Me. I asked you for something and you only give Me little bits and pieces. Would you just bring Me ALL that I ask of you? Give Me a try! Test Me and see what all I can do for you! If you do, then you’re going to find out that I’m just going to give you more. I will throw open the gates of Heaven and pour out so much goodness and blessings on you, that you won’t even be able to store it all. Try Me!

“Just test Me and see what happens. If you do, then people all over will call you the happy ones! Because your land will be called Delightful.“

Have you ever wondered: What if we only receive gifts from God based on the amount of ourselves that we give to Him? The amount of our heart, soul, mind, strength, attention, energy, passion, and love that we pour out on Him and others — what if God only matches that?

So if we only give Him little bits and scraps of ourselves and our lives, then He only blesses us that little, bitty amount.

But what if we give Him ALL of our heart, soul, mind, strength, attention, energy, passion, and love? What if we pour out all we have on loving Him?

I think He would do some amazing things with some people like that. Don’t you? Because that’s just the way God is. That’s just who He is. So, let’s give Him our best and our All.