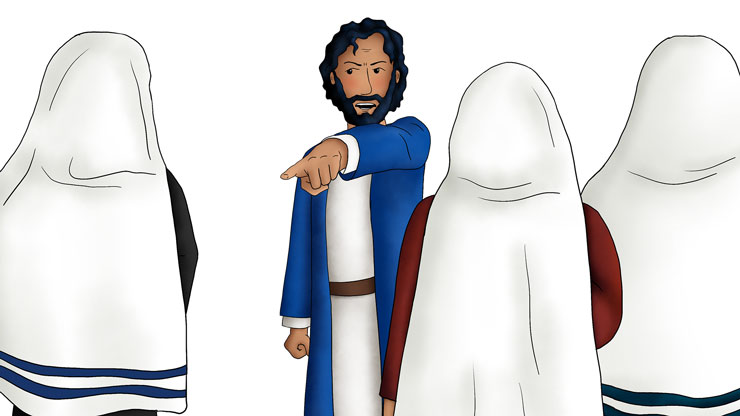 So Don’t Be One

Trouble’s Coming to Phonies : So Don’t Be One

After Jesus told His friends not to call the religious leaders by special titles, Jesus turned and started talking directly to those guys who did let themselves be called “Rabbi” or “Teacher” or “Father so-and-so.”

He said, “Trouble’s coming to you, rule experts and religious scholars. You’re pretenders! Hypocrites! You are locking people out of the Kingdom of Heaven! You don’t go in, and you don’t let others go in.

“Trouble’s coming to you, pretenders! You cross land and sea to make one convert, and then you make them double the child of hell you are!”

Do you understand why Jesus is getting on these guys?

It’s not because He didn’t like for people to study the scriptures! And it’s not that He ignored other kinds of sin. But Jesus hates hypocrisy. That means He hates it when people SAY one thing, but DO something different. People who pretend to be something they’re not.

Jesus is not playing around with people who want to hold on to their own opinions or do things as they please. Nope. He has NO time for that.

“Trouble’s coming to you, blind guides. You make up all this stuff about when you have to keep your promises or not. You’re blind fools.

“Trouble’s coming to you, experts in the rules and religious scholars — you phonies! You give a tenth of all your expensive stuff, yet you neglect and forget about justice, mercy, and faithfulness! Blind guides! You strain out a gnat, yet swallow a camel!

“Trouble’s coming to you, law experts and religious scholars — you fakers! You clean the outside of the cup, but inside you’re full of greed and self-gimme, gimme, gimme. You’re blind! If you’d start by cleaning the inside of your cup (your heart), the outside would get clean too!

“Ohh! Trouble’s coming to you, law experts and religious scholars — you frauds! You’re like whitewashed tombs that look spotless on the outside, but inside are full of rotting, stinking bones of the dead and everything unclean, everything unholy. On the outside you look righteous to people, but inside you’re full of disobedience and make-believe.

“Trouble’s coming to you, law experts and religious scholars. You’re pretenders! Hypocrites! Phonies! You build tombs for the prophets and decorate the graves of the righteous. And you say, ‘If we had lived long ago, we would not have hurt and killed the prophets.’ By saying this you admit that you’re children of those who murdered My Heaven Seers. Go ahead, finish what your fathers started. You snakes, you children of poisonous snakes! How will you escape hell?

“Because of this, I am sending you Seers, men full of wisdom, real experts — people who know My words. Some of them you will kill and crucify, and some you will beat up and chase from town to town. Then you will be to blame for all the righteous blood spilled on the earth — starting all the way back with the blood of righteous Abel. This generation will be held responsible for it all!

“O Jerusalem, Jerusalem, you who kill the prophets and stone those who are sent to you! How often I have longed to gather your children together as a hen gathers her chicks under her wings, but you would have none of it! Now your house is abandoned! You won’t see Me again until you say, ‘Blessed is the One who comes in the name of the Lord.’”