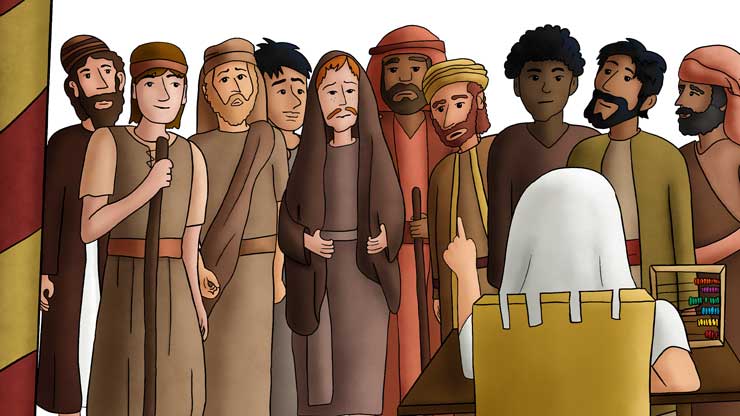 Get Another Chance to Love

The Ten Brothers : Get Another Chance to Love

You’ve already learned a lot about Joseph, but we’re going to back up and tell you even more of the story. Joseph and Benjamin were brothers from the same mommy and daddy, Jacob and Rachel. Remember how Jacob had worked hard for 14 years to get Rachel as his wife? Jacob had 10 other sons with 3 other wives, but if you remember, Rachel was the wife he’d really wanted, and worked for, and loved the most. But Rachel didn’t have any children for a long, long time after being married. So, when Rachel finally did have children, they were very special to Jacob. Jacob was very old by then, and Joseph and Benjamin were his last two children.

When the 10 other brothers threw Joseph in the pit and sold him as a slave to Egypt, Benjamin was very young. But by the time Joseph was in charge of all Egypt, Benjamin had grown up into a man.

You probably remember that there was a famine in the land where Jacob and his sons lived, and the sons came to Egypt looking for food while Joseph was in charge. That’s the story we’re going to tell you a little more about.

When the famine first started, only ten of Jacob’s sons came to Egypt and appeared before Joseph. Benjamin didn’t come. He stayed home with his dad, Jacob.

When Joseph’s other brothers got to Egypt, they didn’t recognize him. But Joseph recognized them. They were the brothers who had thrown him into that deep, dark, scary, black pit and sold him into slavery.

When he saw them, he thought, “Is that Judah? Simeon? Reuben?… My brothers!” He wanted to tell them who he was, and let them know he had forgiven them! But then… he noticed that one brother was missing!

“Where’s Benjamin? Why is he not with the other brothers? Is Benjamin still alive, or had the mean brothers jealously hurt Benjamin, too?” thought Joseph.

“You are spies who want to attack Egypt!” Joseph accused them.

“No, we are honest men,” they said. “We were 12 brothers, the sons of one man, who lives in the land of Canaan. The youngest brother is at home with his dad and one brother is no longer alive.”

“I don’t believe you!” Joseph said. (But he was only pretending not to believe them. And Joseph was happy to hear about Benjamin and his father! He really wanted to see Benjamin again! But, Joseph was still going to have to poke around a little bit to test them to find out if what they were saying was true.)

Joseph told the brothers, “Here is what you must do if you want me to believe you. Go home, get your youngest brother, and bring him back here with you. Also, one of you must stay in Egypt as my prisoner until the rest of you come back.”

The brothers were scared. They said to one another, “Surely we are being punished because of what we did to our brother, Joseph. We saw how upset he was when we threw him in the pit, but we did not listen to his cries. God is punishing us!”

When Joseph heard them say this, he started to cry.

It was a good sign that the 10 brothers’ consciences were still alive enough to know that what they had done to Joseph was very bad. And even though they had tried for a long time to hide the ugly thing they’d done, they knew they were still guilty. They expected punishment from God, and knew they still deserved it, even though it had been such a long time.

The brother named Simeon stayed in Egypt as a prisoner and the other brothers went back home. When they got back home they told their dad, Jacob, all that had happened to them. Jacob was sad that his son Simeon had to stay in Egypt, but he was scared that if he sent Benjamin back with them, he would lose Benjamin, too. They begged Jacob to let them take Benjamin to Egypt so they could get Simeon back. Reuben tried to promise Jacob that he would protect Benjamin if Jacob would let him go, but Jacob still said, “No way!”

As the famine continued though, the big family ran out of food again. They were going to have to go back to Egypt for food, or they would die. Judah bravely promised his father that if anything happened to his little brother Benjamin, then he would take the blame. (That’s another good sign.) Finally, Jacob agreed to let Benjamin go, so the brothers headed back to Egypt with Benjamin.

When Joseph saw little Benjamin returning with his brothers, he started to cry so-happy tears. He had to quickly hide his tears so the brothers wouldn’t wonder why he was crying.

Joseph fed them all a great feast and treated them all like special guests.

But Joseph still needed to find out more about his brothers. Had the 10 brothers softened their hearts and really changed from the bad attitudes of jealousy and comparing? Had the brothers stopped planting the field of jealous seeds that had started way back with their mommas, Leah and Rachel? Did the brothers love each other? Were they ready to stand together as One Family now? Joseph wanted to find out.

Joseph arranged for Benjamin to be served FIVE times the amount of food as the others! Benjamin had more, more, more food than all the other brothers.

“Will that make the others jealous?” Joseph wondered. He watched, but nothing bad seemed to happen. The brothers didn’t seem to mind at all that Benjamin received more. They feasted together happily.

And Benjamin certainly didn’t mind getting extra. He’d come to Egypt anticipating there could be trouble after what had happened last time. This same ruler, Joseph, had accused them and put Simeon in prison! So it had felt a little scary coming into Egypt. But, now it was just yummy food and fun.

The next morning the brothers left Egypt and were on their journey home. They were laughing and singing and talking all about what had happened the night before, when all of a sudden, Joseph’s servant rushed up to them very angrily and said, “One of you stole my master’s magic silver cup. Why have you done this evil thing?

The brothers were sure there had been some mistake. They said, “We are honest men! None of us would ever steal your master’s cup! You can even check our sacks of grain! If one of us has it, he will die, and the rest of us will become your slaves.”

“Agreed,” Joseph’s servant answered. Then the servant went to the oldest brother’s sack and opened it. There was no cup in there. He went to the 2nd brother. No cup. Then he went to the 3rd. No cup. He checked the 4th, 5th, 6th, 7th, 8th, 9th, 10th brother’s sacks. No cup. Finally, he reached the 11th brother, little Benjamin. He opened his sack and there on the top, was… the… cup!

Do you see what is happening? Joseph had told his servant to sneak the cup into Benjamin’s sack so that it would seem like Benjamin had stolen it. Joseph was testing them. These brothers who had jealously sold Joseph into slavery many years before, now had a choice — would they be jealous and let Benjamin become a slave now or would they stand up for Benjamin as One Family?

“OH NO, the magic cup is in Benjamin’s sack!” the brothers gasped. “Not our littlest brother! Not our daddy’s most loved son.” They couldn’t believe it. They cried out, ripping their clothes in heartbreak.

Benjamin watched in disbelief. “How could this be happening? Everything was perfect last night. What went wrong? Why is this happening? I did not take that crazy cup!” (But there’s no evidence that Benjamin said anything to defend himself, but he was probably thinking that.)

With heads hanging low and their hearts heavy, all 11 brothers loaded their donkeys and returned to Joseph.

Judah led the brothers into Joseph’s house to answer for the “stolen” “magic” cup. They threw themselves onto the ground before Joseph.

Joseph said to them, “What did you think you were doing? Don’t you know that a man like me can find out things like this by magic?” (Of course Joseph knew that cup wasn’t magic and that he’d sneakily had the cup put in Benjamin’s sack himself.)

“Oh! What can we say? How can we clear ourselves?” cried Judah. “I know, know, know that none of us took your magic cup, but here it is in our little Benjamin’s sack. God must still be angry with us. We are now all your slaves.”

Did you hear that? They are standing up for Benjamin! They are standing together. Yay! It would have been easy for them to think Benjamin had stolen the cup. After all, the cup was in his sack. But the brothers trusted Benjamin. They believed Benjamin was innocent, regardless of the “proof” or how it looked. Not only that, but their guilty consciences told them that whatever was happening was discipline for what they had done many years before.

Joseph answered, “No, you do not all need to become my slaves. Only the youngest, the one who stole my magic cup, will become my slave. The rest of you are free to go home.”

Oh no! This was not ok with the brothers. The brothers were so upset. Judah thought of his dad Jacob and his promise to protect Benjamin. He could not let this happen!

Judah came forward, “Please let ME stay here as your slave and let Benjamin go home. My father’s life is bound up in Benjamin’s life. He loves this son most of all. How can I go back to my dad if the boy is not with me? I love my dad. I could not bear to see my dad hurt that badly. It would kill him if his favorite son didn’t return! Take me as your slave instead. Please!”

There was the LOVE Joseph was looking for in his brothers! Now he could REALLY see that his brothers had changed. Joseph broke down crying the biggest, happiest tears you have ever seen.

Joseph didn’t need to hide who he was any longer, so he finally told them, “I am Joseph! Your brother!”