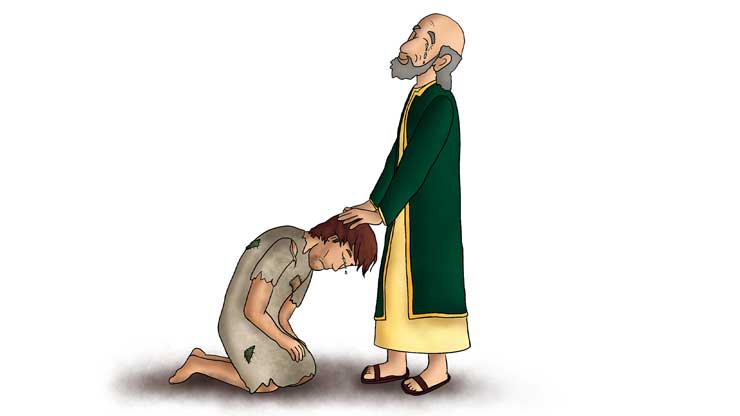 Comes to His Senses

The Lost Son : Comes to His Senses

After Jesus told the story about the lost sheep, He told this story:

Once there was a man with two sons. The younger son said to his father, “Father, when you die, your money and stuff will be given to me and my brother. Well, I’ve decided that I want my half of the stuff now.”

That sounds arrogant and greedy and mean, doesn’t it?

But the father agreed and divided all he had between his two sons. As soon as the younger son got the money, he told his father, “Great. Now I’m leaving. There are things I want to feel and experience that aren’t here.” So he left his father, his brother, and his home.

But the things that son wanted and craved were only things that would feed his flesh senses, the sights and sounds and feelings of the Seen world — the feel-good feelings of having nice stuff and money and having things to do or places to go that felt exciting or new. That’s called wanderlust.

Have you learned about your senses yet? Your body has five senses: taste, touch, smell, seeing, and hearing. God was ingenious to give us these senses. They can protect us. They can keep you from bumping into things. From burning yourself — oooh, oooh, oooh, hot, hot! They can also be enjoyable. It’s nice to taste your favorite food, and to hear the birds sing, and to see your dad’s smile, and to feel a hug from a brother or sister.

But the trouble starts when we start being a person driven by our senses. We luuuuuv how it feels to be touched. Or we luuuuuv the taste of food. Or we luuuuuv listening to music, and dancing. We let our flesh revel in it. We soak it up and luuuuuv it in a yucky way — always looking for more and more ways to experience those feel-good-flesh things. And instead of giving thanks to God for these gifts, we greedily crave more and more and more of the things that make us feeeeel goooood. This is what happened with this younger son.

Don’t ever let your little body — your flesh, your skin and bones and organs — make your decisions. It might feel good for a little while, but it will turn out very badly.

The younger son used all the money his father had given him on wild, mammal-flesh living — just doing anything that made him feel good.

Eventually, he found himself with… nothing. Not only did he not have any money, but he had no real friends, and no home. He was all alone.

Then there was a famine in the land. Food and jobs were hard to find. The only job he found was working in a stinky, icky pig pen feeding the pigs. He was so hungry he wanted to eat the pigs’ food, but no one gave him a thing.

Finally, one day when the son was sitting in that pig pen wanting to eat the pig slop, he came to his REAL senses. He realized how foolish he was being.

Every single person starting back with the first man, Adam, was created in the Father’s nature. So in our REAL senses, those deep-down-inside God-senses, we know that we are meant to live with our Father in His House. Deep down we know, “I don’t belong in a pig pen of sin, being dragged around by the cravings of my skin and bones senses — running after the cravings of taste, touch, smelling, hearing, and seeing. A pig pen is not where I belong. So I won’t live here any longer!” We all know that, but we all still have choices to make. And the young son has to admit that he was wrong and sinned. So let’s see what happens.

The son remembered his kind and loving father, who had always taken good care of him, and he thought, “What have I been doing?! Even my dad’s servants have plenty to eat. Meanwhile, I’m here starving in a pig pen. I will go back to my father and say, ‘Dad, I’ve sinned against Heaven and you. I’m no longer worthy to be called your son. But maybe I could just be one of your workers and be treated like them. I don’t need this feel-good-flesh stuff anymore. I just need to be near you!’” So with that thought, the son got up and started on his way home.

Now, the father had missed his son dearly. When his son had decided to leave, the father hadn’t chased after him. But he also didn’t pretend that everything was fine. Instead he waited, and watched, and prayed for his son to return. As he was waiting and watching one day, he looked out toward the horizon and saw far, far away a tiny shape of someone coming down the path toward the house. He knew right then, it was his SON!

The father took off running, running, running down the road to meet his son. And when he got there he hugged him and kissed him. Immediately, the son fell to his knees and said, “Dad, I’ve sinned against Heaven and against you! I was so wrong. I shouldn’t even be called your son anymore.”

But the father just interrupted him and called to a servant, “Quick! Get the best robe and ring for my son. Get him some shoes! Prepare a huge feast! Because my son was dead, but is alive again! He was lost, but now he has been found!”

And so they started to celebrate.

The older son who had stayed with his father the whole time heard all the commotion, and asked a servant, “What’s all the celebrating about?”

The servant answered, “Your father — he’s throwing a party because your brother has returned safe and sound!”

The father replied, “O my son, we’re always together and everything I have is yours. But it is right to celebrate because your brother was dead and now he’s alive! He was lost, but now he’s found!”

And that’s where Jesus’ story ended.

Sounds like neither son realized from the beginning just how Perfect and wonderful of a father they had. He’d given them both all his riches. Everything he had was theirs, including a loving and safe home where they could all be Together. The younger son wasted the gift trying to feed his senses and feel-good cravings, while the older brother wasted the gift by living like a slave in the house instead of a son.

I hope everyone listening to the story learned some lessons from the two sons. Tickling or feeding our senses separates us from our Perfect Heavenly Father (and ends up in a pig pen). But, being a good little boy who doesn’t learn to love and dance and celebrate with His Father and brother, doesn’t make the Father happy either.