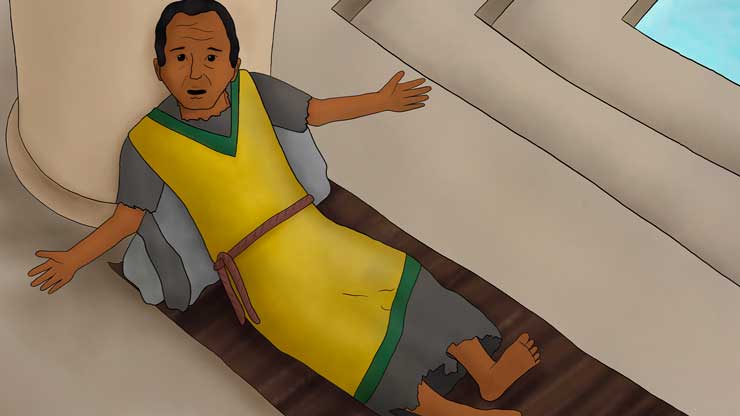 One time Jesus was walking along a path where many sick, blind, lame, and paralyzed people were. Jesus asked one of them, “Do you WANT to be well?”

So, what do you think the lame man said when Jesus asked him if he wanted to be well? Here’s the surprising thing — the man didn’t say “yes.”

Well, I guess there are reasons why someone could not want to be better. Occasionally someone might like the attention they get from being sick, or weak, or needy. (And I do mean only occasionally because this wouldn’t be true all the time.) Or maybe someone kinda wants to be well, but they’re also kind of afraid that life might be harder because if they don’t have the excuse of being sick, then people might expect more of them. Like maybe this man would’ve had to start working for money instead of people just giving it to him. And instead of getting help himself, maybe he’d have to take responsibility for his own life and maybe even help take care of others. Those types of changes can feel scary to people sometimes. (Again, this wouldn’t be true with everybody, but occasionally it could be true.) So maybe that could be why Jesus asked this man the question.

When Jesus asked the man if he wanted to be well, the man said, “Boo-hoo… Poor me. I don’t have anyone to help me so that makes it harder for me than for all the other sick people.”

Wow! That’s sad. Jesus asked him something very simple, and the man didn’t even answer the question! Instead of just saying “yes!” to Jesus’ question, the sick man instead decided to just explain, explain, explain his circumstances about why he wasn’t already healed.

Well, Jesus wasn’t about to play games with the man and ask him again. So this time, Jesus made it even easier. Jesus told the man, “Stand up. Pick up your mat and walk.”

The man could tell Jesus wasn’t messing around with any of his circumstance explanations, so he stood up and picked up his mat and walked! He was healed!

Jesus didn’t want any attention right then so He slipped away quietly in the crowd.

When the Jewish leaders saw the man carrying his mat they said, “Hey! You! You’re breaking a rule. It is wrong to carry your mat today. It’s a Sabbath, the rest day.”

The healed man said, “Uh, yeah, but the man who healed me told me to pick up my mat.”

“Who was that?! Who told you to break a rule?” the leaders replied.

Since Jesus had slipped away, the healed man didn’t even know Jesus’ name. So he told the religious leaders, “I don’t know who it was.”

Later, Jesus found the healed man and told him, “You see? You’re not hurt anymore. You’re well. But stop sinning right now, or something worse is going to happen to you, much worse than not being able to walk.”