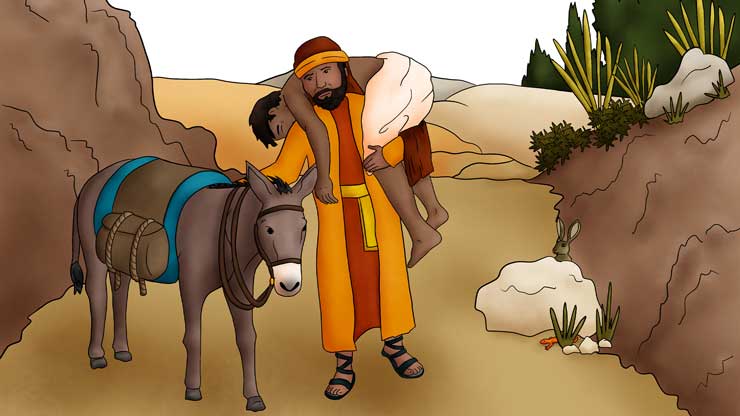 Love Your Neighbors With No Favoritism

The Kind Foreigner : Love Your Neighbors With No Favoritism

One day a man who was an expert in religious law stood up to try to test Jesus by asking Jesus a question.

“Teacher,” the expert said, “what can I do to have eternal life?”

Knowing that the man claimed to be an expert in the Law Jesus asked him, “What does the Law say? How do you understand it?”

Jesus nodded and said, “That’s right. So do that and you will live.”

But this so-called expert, wanting to feel better about himself, questioned Jesus again, “But who is my neighbor?”

Jesus answered him with a story: “Once there was a man traveling on the road to Jericho, when all of a sudden robbers snuck up on him. They jumped on him, stole his clothes, hit him, kicked him and left the man almost dead. The man lay on the road hurting… bad. He couldn’t get up.

“Just then along came a religious priest, walking down the road. The priest saw the hurt man but instead of stopping to help him, he scurried to the opposite side of the road so that he would be far away from the hurt man as he quickly walked on by.

“Next a Levite came walking down the road. He heard the man groaning and saw that the man was hurt badly. But he didn’t help the man either. Instead he moved to the other side of the road and kept on walking.

“Finally a foreigner came walking down the road. He saw the hurt man and having kindness in his heart, thought, ‘I’ve got to help that man.’ So the foreigner hurried over to the hurt man and started doing everything he could to help. He used his own supplies of food and drink to help the man. He cleaned and bandaged his owies.

“But the hurt man still couldn’t walk, so the foreigner picked him up, and put him on his own animal. Then he took the man to an inn and took care of him. The next day the foreigner needed to keep traveling, but he wanted to make sure the hurt man was cared for. So he took out two silver coins and gave them to the innkeeper and said, ‘Here’s some money. Please take care of this man. And if you spend more money than what I have given you, I will repay you when I come back this way.’”

After Jesus finished the story, Jesus looked at the Law expert and asked him, “Which of the three men traveling on the road became a neighbor to the hurt man?”

The expert said, “The one who showed mercy to him.”

Jesus said, “You go and do the same.”

A neighbor is usually someone who lives near you, isn’t it? This foreigner and the hurt man didn’t live near each other. But the foreigner made himself a good neighbor to the hurt man by loving him.

The question the expert in the Law asked was, “Which people are my neighbors? Who do I have to love?” But Jesus’ answer was, “It doesn’t matter who they are. It’s about who YOU choose to be. YOU go and have mercy, not selfishness or judgment.”

To your precious little ears, this might seem like a pretty simple thing Jesus was saying. He’s just telling “the expert” the one rule: Love.

But as we know, Jesus has a way of cutting through the yucky parts of men’s hearts and that’s what He was doing with this story. In that part of the world at that time, many people did not like the “foreigners” Jesus was talking about. Could it be this expert thought he was a better man than that foreigner? Or could it be this expert had chosen to pass by people who needed help? Whatever the details, Jesus cut right to the point and showed him that someone who Loves, even if it’s a foreigner, is the person who receives Life forever.

This brings up a big problem that is still found all around the world today. People can tend to dislike others who seem different from them in some way. Booooo! Or they can tend to prefer to be with or hang around people who are the most like themselves. Also Booooo! That’s just silly flesh stuff.

Do you think God loves anyone less because of where they were born? Or how much money they have? Or what color their skin or hair is? Or what their last name is? Do geographical lines on a map matter to the Creator of all mankind? No. That is so ridiculous and wrong. So don’t let yourself be like that. Don’t have favorite people based on flesh stuff. And love your neighbors, all of them, as much as you love yourself. That’s what Jesus said, so do it!