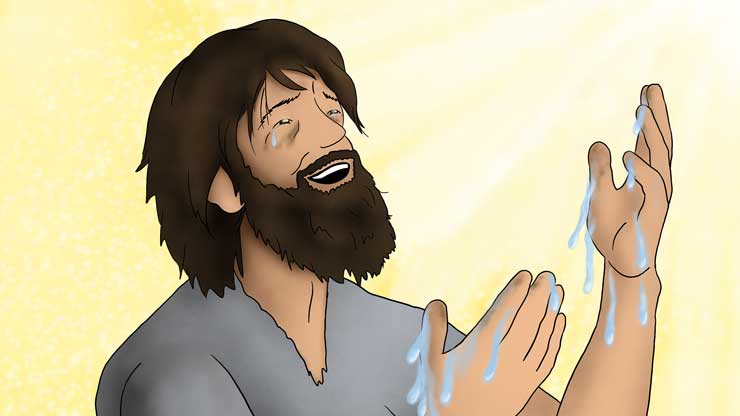 Meets the Light of the World

The Blind Man : Meets the Light of the World

Jesus knew how much the man had suffered. Jesus knew this man had been blind ALL his life! Jesus answered them, “No, it’s not that at all. It’s not punishment for anything. This man was born blind so that the amazing works of God may be brought to light by what’s about to happen to him.”

(Just like with Job and his rough days, this man’s owies didn’t mean God was punishing him.)

Jesus continued, “We’ve got to do the work My Father sent Me to do while we can, in the daylight, because night is coming and we won’t always be able to work. But as long as I am in the world, I am the Light of the world.”

Then Jesus bent down close to the man. He spit on the ground, and made a glob of mud from the dirt and spit. Then He smeared the mud on the man’s eyes.

“Now go wash your face in the pool.”

So the man got up and started toward the pool. (Have you ever had even a speck of dirt in your eye? It hurts, doesn’t it? I imagine the man was very relieved to finally reach that pool.)

The man reached out and felt the cool water in his hands as he scooped it up to his face. Splash, splash, splash! He washed all that mud out. But was it going to sting when he opened his eyes? Blink, blink. Eyes… opened! Light and beauty flooded into his eyes like he’d never dreamed! Light! Beautiful Light! He saw the world around him in a way he’d never known. The trees. The grass. The animals. The people! The world was beautiful, alive and colorful! God’s creation was glorious!

The man hurried home while his eyes soaked in every beautiful thing he passed. “Is that a dog?! How cute! And are those flowers?! And the sky… is that what you call blue?!”

Remember how Jesus had just told His followers that the man was born blind so that God’s amazing works could be brought to light?

If you put it that way, it actually sounds like a special privilege and a gift to be the one to have the hard things happen to you, doesn’t it?! Even though the man had something hard in his life for many years, he is getting to be part of something super special and awesome.

But can you stop and think about how many years that man felt not-so-awesome? Being part of God’s Glorious Plan doesn’t always feeeeel awesome. He didn’t know there was a miracle waiting around the corner for him. He didn’t know that God was going to use his blindness to show the world the Glorious Power of His Son.

Remember how Abraham lived in the wilderness without a home, and even sacrificed his only son? But he became the father of the stars and the Father of a New Nation (even though he didn’t get to see it all in his lifetime).

And remember how Isaiah said “Pick me!” to getting his lips burned and doing some hard work? But he got to see all sorts of wonderful things about the Shining Rescuer.

And remember how Mary was willing to be Jesus’ mommy even though people would think she was a bad, lying lady? But she got to be close to the Messiah from the day He was born!

And even if your ouchy thing isn’t something you can exactly choose — like being born blind, for example — you can always have that attitude of “Yes. Pick me! I’ll do anything you want, God! Anything, anything, Anything!”

Sometimes, we might even go our whole lifetime and never understand why certain owies were part of our lives. But that’s okay too. It’s enough, enough, enough to know that we’re in the palm of Daddy’s hand.

It’s a privilege when Jesus lets us be a part of sharing in His suffering and bringing Him glory.

Peter talked about this same thing later in his life. He said, “However much you’ve gotten to share in Christ’s sufferings, REJOICE that same amount. And then, when God’s glory is shown, you’ll be happy and rejoicing all the more!”

Because the temporary owies of this life, even the really, really painful ones, are so worth it to get to share in Jesus’ sufferings and be a part of His Story!