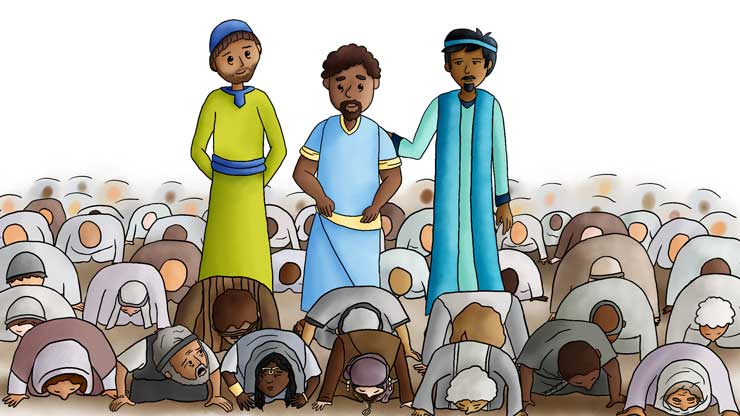 Thrown in the Hot Fiery Oven

Shadrach, Meshach, and Abednego lived in Babylon. You already know a lot about them. They were Daniel’s three friends. Sometimes when you move to a different country, the people speak a different language and so your name might change. They had grown up in God’s City as Hananiah, Mishael, and Azariah, learning all about God and about Abraham, Isaac, and Jacob — just like you. But once they were taken away to Babylon, their names became Shadrach, Meshach, and Abednego.

God made them strong and smart and able to take care of hard problems.

One day, the proud king Nebuchadnezzar did something very wrong. It is so wrong that you might think it sounds ridiculous.

He made a statue as tall as a big building and covered it in gold. Then he made a rule that said people from all around his kingdom had to come and worship the statue. Does that remind you of one of the 10 rules God wrote? Yes, King Nebuchadnezzar’s rule was the opposite of God’s rule! One of God’s commandments was “Do not make statues and worship them.” Nebuchadnezzar had made a rule that broke one of God’s rules. Uh-oh. Trouble.

King Nebuchadnezzar said, “Look at my beautiful golden statue! As soon as you hear the music start, you must bow down and worship this statue. If you don’t do it right away, you will be thrown into a hot, hot, hot fiery oven.”

Even though the statue was silly and worshipping it was really wrong, all the people did it anyway. All the people except for three men — Shadrach, Meshach, and Abednego. These three men did not bow down to the statue. They would not obey Nebuchadnezzar’s rule and worship the statue because that would mean they would have to disobey God’s rule. And there was NO WAY they were going to do that.

This made the proud king very angry. His face turned bright red, his teeth gritted together, and his fists clenched tightly. He angrily yelled for the three men to come to him.

“What are you doing?!” he yelled. “Is it true that you don’t worship my gods? You’d better bow down to my statue, or I am going to throw you in the fiery oven! And there is no god who can rescue you from me!”

“O Nebuchadnezzar,” the men calmly answered,“We don’t even need to answer you about this. The God we serve can rescue us from the fire, and from you. But even if He doesn’t, we are not going to serve your fake gods or worship your statue.”

The proud king got even angrier. He had his soldiers tie up the three men with ropes. Then he threw them into the hot, hot, hot fiery oven.

But God was watching. He saw those three men who loved Him and wouldn’t bow to anyone else.

The three men were not even tied up anymore. They were just walking around inside the hot, hot, hot fiery oven, with the angel from Heaven!

Nebuchadnezzar said, “Shadrach, Meshach, Abednego, you men who serve the Highest God ever, come out of that fire right now!”

Shadrach, Meshach, and Abednego might have been a little bit sad to have to leave God’s angel, but they did come out of the fire.

Do you think they were burned? No! King Nebuchadnezzar and all the important men gathered around to see them. But their hair wasn’t burnt, their bodies weren’t burnt, and their clothes weren’t burnt. They didn’t even smell like smoke!

Then the proud King Nebuchadnezzar was amazed at God again and said, “The God of Shadrach, Meshach, and Abednego is awesome! He rescued His servants because they love Him and would rather go into the fire than disobey Him. No other god can save like this! Their God is the best. Their God is BIG STUFF!”