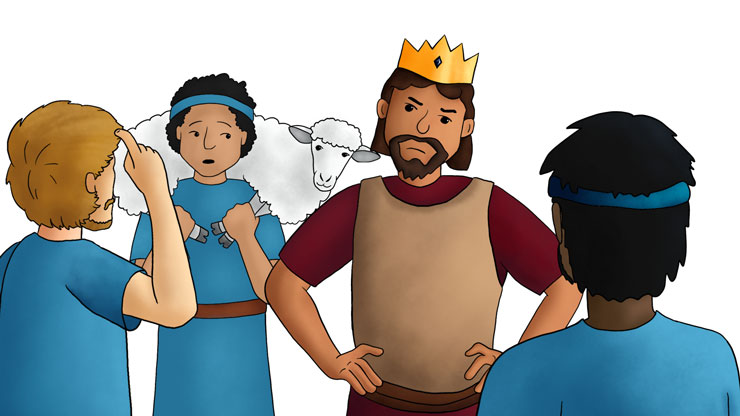 Finds Out Obeying Is Better Than Sacrificing

King Saul : Finds Out Obeying Is Better Than Sacrificing

Saul had already messed up badly by deciding he would do the sacrifices all by himself instead of waiting for Samuel. But Saul still had more choices to make every day about whether or not he would obey God.

One day, God sent Samuel to go see Saul again. Samuel said, “Listen carefully to what the Lord of Heaven’s Armies has to say to you: ‘Saul, I carefully watched how the Amalekites were against My children when they came out of Egypt. (Remember when Moses held up his arms during an entire battle? That was the Amalekites.) That was not ok with Me. So Saul, I want you to go right now and strike them down. COMPLETELY destroy everything of theirs. Put to death every single living thing — ALL the people and ALL the animals.’”

So Saul got his army ready and charged off toward the city of the Amalekites and started killing them all.

But when Saul got to the palace and saw the Amalekite king, he thought to himself, “This guy’s pretty valuable. I’ll show him off like a trophy.” (That’s what kings usually did when they captured other kings.) So Saul took King Agag as a prisoner instead of killing him.

The army men started fussing about killing perfectly good animals. Saul was worried about what his army men were thinking, so Saul came up with an idea of how to justify not killing everything like God said. He said, “I know! We’ll keep the best of the animals for now, and we’ll sacrifice them to God sometime later. That way we can still get some good out of them, and they won’t be wasted.”

Whoa, whoa, whoa! Had God said, “Keep the best animals for sacrifices, and kill all the weak ones.”? No. He said, “Kill ALL the animals.”

Saul had disobeyed again, hadn’t he?

This was NOT just some random, optional task from God. God doesn’t do that.

This particular job was about a promise God made 400 years earlier. God had promised Moses and Joshua and those with them that He would destroy the Amalekites completely. And God had entrusted Saul with the job of doing that for Him. But Saul took it upon himself to do things a little differently.

Please always remember: Often times things are just waaaay bigger than you. You may think “it’s no big deal” to do something your own way, when really there may be something bigger that you just don’t understand yet.

So that night God told Samuel, “I regret that I made Saul king, for he has turned away from Me and has not done what I told him to do.” Samuel became angry, and he cried out to God all night long.

When morning came, Samuel got up early to go meet Saul. When Samuel asked where Saul was, he was told, “Oh, Saul left to set up a statue to himself, then he’s going to Gilgal.”

(What? Setting up a statue to himself?! Talk about pride! He’s trying to get attention for himself, huh?)

So Samuel left and went down to Gilgal to find Saul.

When Saul saw Samuel coming, he said, “Look! I did what the Lord commanded!”

Samuel answered, “Oh really? If that’s true, then what is all this mooo-mooo and maaa-maaa I hear?”

Saul said, “Uhh… well, they’re the enemy’s animals. But the army saved them just so we could sacrifice them to the Lord! Everything else we completely destroyed.”

Samuel was upset and disappointed. “Be quiet! Let me tell you what the Lord said to me last night. Didn’t the Lord choose to make you king over all Israel, even though you knew you were unimportant? And now the Lord sent you on this job saying, ‘Go and completely destroy those sinful enemies!’ Why have you not obeyed the Lord? Instead you have greedily rushed to keep the enemies’ stuff. What you did was very wrong in the Lord’s sight.”

But Saul was defensive and kept making excuses, “But I have obeyed! I did do the job the Lord sent me on. I brought back the king of the enemies and killed the rest of the people. The army just took some of the best animals to sacrifice to the Lord.”

Saul’s words showed just how guilty he was! He had done what was right in his own eyes, thinking he could pretend to be “spiritual” and “sacrificial.” He thought, “Sacrificing is a good thing to do. What could be wrong with that?” But in doing that, he disobeyed GOD. He didn’t want to obey God’s specific instructions for him, so instead he tried to replace obedience with a “good thing to do.” That sounds like the poop on the plate again, doesn’t it?

Then Samuel said, “What makes God happier: sacrifices or obedience to His words? Certainly, obeying is better than sacrificing; paying close attention is better than giving God animal fat. For rebellious disobeying is the same as serving satan. And thinking you can decide yourself is the same as worshipping idols. Because you have pushed away the Lord’s instructions, He has pushed you away as king.

When Samuel turned to leave, Saul grabbed a fistful of his robe. He clung to it so hard that a piece of it ripped off in his hand.

Then Samuel turned and said, “The Lord has ripped the kingdom from you today and has given it to someone who is better than you! God will not change His mind.”

After Samuel finished speaking, he had king Agag brought to him and Samuel killed him right there. So Samuel finished fulfilling the promise God had made to Joshua 400 years before.

After that, Samuel never went to see Saul again for the rest of his life. This relationship was over. Samuel did cry for Saul. But the Lord wished He’d never made Saul king at all.