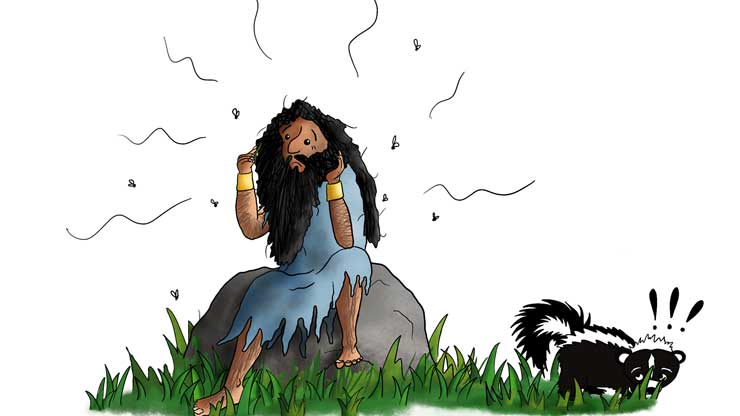 The Proud King Who Said ”Look at Me”

Nebuchadnezzar : The Proud King Who Said ”Look at Me”

King Nebuchadnezzar was very proud. That means he thought a lot about himself. He thought he was smart and important and strong. He thought the things he had done were really great, and he wanted everyone else to think so too.

God had given King Nebuchadnezzar chances to be humble.

Remember how God told Daniel about King Nebuchadnezzar’s secret dream and what it meant? God showed him that He knows everything, even the king’s secret dreams.

The king was amazed when that happened! But then the king forgot about that and kept being proud, proud, proud.

Then remember Shadrach, Meshach and Abednego who King Nebuchadnezzar threw in the fire, but they didn’t get burned? God showed He can rescue people from fire. Again, the king was amazed, and he realized that God was Big Stuff!

Finally, God warned king Nebuchadnezzar that He would take away his kingdom if he didn’t change. But the king was still proud, proud, proud.

We really should listen when God tries to warn us like this. God clearly liked the man and was trying to help him change. We really don’t have to learn all our lessons the hard way like this. We can change when we’re warned the 1st time, and then we don’t have to be disciplined.

He hadn’t even finished saying that when God spoke to him from the sky, “Nebuchadnezzar, I am taking this kingdom away from you. I warned you to stop wanting people to look at you, and you have had many chances to be humble and realize I am the one who made things go well for you, but you are still proud, proud, proud. So, now, you have to go away and be all alone. You will eat grass like a cow until you stop being proud. When you see that God is King of everything and that He is the one who makes people be able to succeed, then you can come back.”

Right at that moment, Nebuchadnezzar couldn’t think clearly any more. His mind got confused. He left his palace and his city and his kingdom and went and started living like an animal, just like God said would happen.

His hair grew and grew until it covered his body like an eagle’s feathers.

His fingernails grew long and hard like a bird’s claws. Scratch. Scratch.

He had to stay out in the rain and cold. Brrrrr!

And all this happened to Nebuchadnezzar because he had loved to think about himself.

Finally, after many, many days, Nebuchadnezzar stopped looking at himself and looked up at God. Then, God gave him clear thoughts, and Nebuchadnezzar worshiped God. He wanted everyone else to worship, too.

He said, “Everyone, look at God’s Kingdom! It goes on forever! We are nothing. God does whatever He wants to in Heaven and on earth. No one can say to God, ’Stop!’