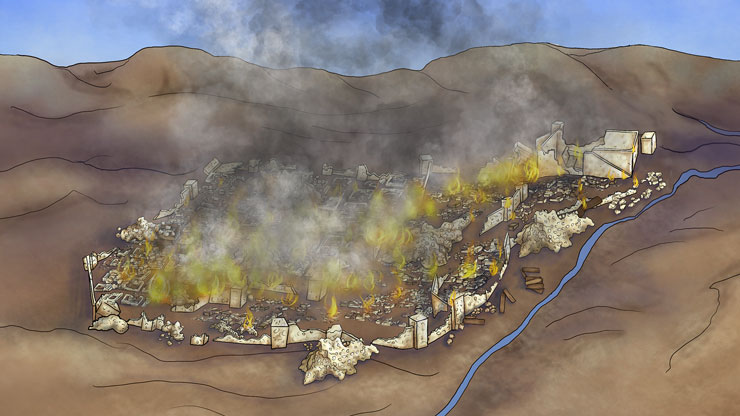 God’s City, Jerusalem, was a special city with very strong walls surrounding it. These walls protected the city from its enemies. But, most of the food was grown in the fields outside of the city, while most of the people lived inside the city.

Any time Nebuchadnezzar wanted to take charge of Jerusalem and take their treasures and boss them around, he would surround the city with his army so that no one (and no food) could get in or out. After awhile the people would get so hungry that they would say to Nebuchadnezzar, “Okay, you win. What do you want from us now?”

King Nebuchadnezzar had already forced his control over Jerusalem like this 2 times. The first time, when Jehoiakim was king in Jerusalem, Nebuchadnezzar took Daniel and his friends to Babylon with the strongest and smartest noble boys.

But this time, Nebuchadnezzar wanted ALL the good stuff from God’s City. He surrounded the city and took even more people away to Babylon. He took King Zedekiah, the last king, as a prisoner. He took the craftsmen and anyone who was really good at their job. He wanted all those people to come work as slaves for him in Babylon. He left only the poorest people. He also took all the people’s money and valuable stuff. Worst of all, he took all the rest of God’s treasures out of the Temple.

After Nebuchadnezzar of Babylon took away the people, he destroyed the entire city, just like Isaiah, Jeremiah and Ezekiel had said would happen long before. The Babylonians destroyed God’s Temple, God’s House. They smashed it to the ground so that there was nothing left.

It was certainly a sad time. But remember, God also promised that good things would come again one day. One day God would bring His People home again and they would build a new House for God!