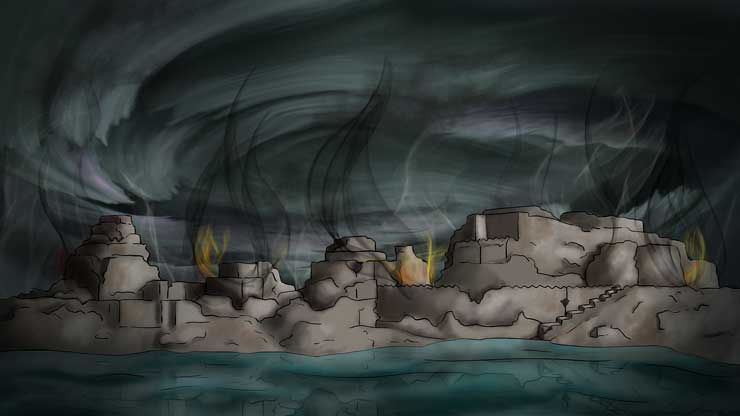 Now is a good time in this big story to mention that in reading this part of the Bible you can’t think of people just as “good guys” or “bad guys.” At times, God used people like King Ahaz or Jehu, as well as nations like Assyria and Babylon to do things He wanted done. But He also punished them later for not being like Him or having a heart like His. No one gets away with crimes and rebellion against God.

So even though God had been using Assyria to scatter God’s Children in Israel and fight with God’s Children in Judah, God wanted to let His Children know that those Assyrians in their big city of Nineveh would also be punished, since they were cruel and harsh people who were not loving God.

God chose to say this through a Seer named Nahum. And he did it in a very poetic way. God spoke in a poem that Nahum wrote down. Each section of the poem started with the next letter of their alphabet. When you read it in your Bibles, you won’t be able to hear the alphabet, because Nahum wrote down the poem in a different language than English. But if it was in English, it might have sounded something like this — the first line starting with A, and the second one with B, and then C and so on… Like this:

A Assyria is going to fall

B Because God’s angry with them all

C Clouds are whirling due to sin

E Everyone who in God puts faith

F Finds out He’s a tower of strength

H His people, though, so safe will be

About 100 years after Nahum wrote down God’s poem, Nineveh and the whole kingdom of Assyria were wiped out, just like God had said.

So remember, God is Fair. Sometimes, because our lives on earth are so short, or just because we only see such a tiny, little bit of the whole picture, things might not seem “fair” to us in a particular moment or situation. But, God is always Just and Right and Fair… even if He decides to take 100 years to work out the details. He IS God.

Sometimes you might feel like someone is doing something “bad” and they’re getting away with it. Or you feel like someone did something worse than you but you got in more trouble than they did… Not your business. God is fair and just. He’ll take care of it in His time.