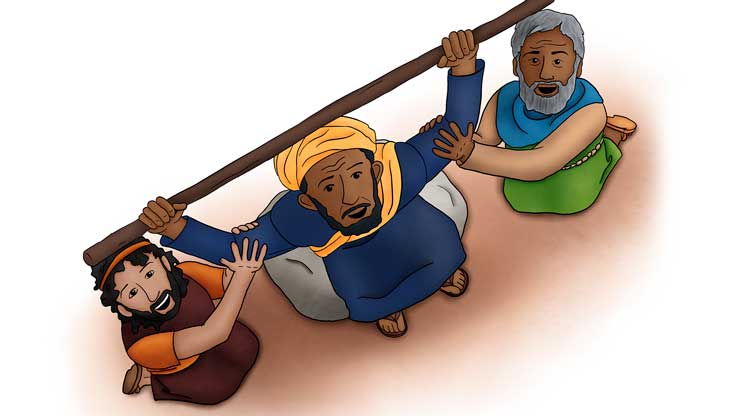 After God gave Israel water to drink from the rock, some enemies noticed the Israelites and came to attack them. These enemies were called the Amalekites. This would be Israel’s first real battle!

Moses called to Joshua, “Joshua! Choose some fighting men to go out with you and fight against the Amalekites tomorrow. I will be standing on top of that hill over there, holding the staff of God’s Power in my hand (that’s the one that turned into a snake back in Egypt).”

So Joshua did just as Moses said. The next day they were ready to fight. Joshua and his men went down to fight the Amalekites, and Moses, Aaron, and their friend Hur went up the hill.

Moses lifted his arms toward Heaven. Moses and his two friends could see the whole battle from up on the hill. As Moses stood with his arms lifted toward God, they could all see plainly that the Israelites were winning! Yay! (If you want, you can stand and lift your arms up like Moses, while I finish telling you the story.)

After awhile, Moses’ arms were getting a little tired, so he dropped his arms to his sides for a little rest as he kept watching. All of a sudden, God’s enemies started winning. Oh no! Moses lifted his arms toward Heaven again, “Lord, please help Your people win!”

Things went on, just like this: Moses would lift his arms toward Heaven, and the Israelites would start winning the battle. But when he rested his arms at his sides, then they would start losing again.

Hmm, Moses should keep his arms lifted to the sky then, shouldn’t he? That’s what Moses thought, too. But, his arms were getting so tired and heavy, heavy, heavy. (Do you still have your arms up? Are they feeling heavy?)

(How are your arms feeling? Is it harder than you expected? And Moses would have to do it for hours and hours.)

On top of that, Moses’ legs were getting tired, too, from standing for so long. What was Moses going to do? He… couldn’t… stand… up… much… longer.

Do you want to know what happened next? Aaron and Hur rolled over a big rock for Moses to sit on. “Ahh, thanks, that helps my legs,” Moses said.

But it was clear that Moses’ arms were the real problem. He was using all his might to keep them up, but his arms were starting to sag toward the ground. He wasn’t going to be able to hold them up much longer. God’s children were sure to lose the battle then.

Aaron and Hur had an idea of how they could help! They rushed over to Moses, each grabbing one of his arms, and they thrust them toward the sky.

“Ahh.” Moses could relax his body a little. “Thanks, guys.”

So there Moses, Aaron, and Hur were, with their arms raised high in the sky toward Heaven. When Aaron and Hur’s arms got too tired to keep holding them up, then Moses would take a turn holding them up himself. For the rest of the day they were taking turns holding up Moses’ arms.

With Aaron and Hur’s help, Moses was able to keep his arms lifted high the whole rest of the battle! And because of that, God’s family had a victory over the enemy that day. Woo-hoo!

After the battle was over, God said to Moses, “Write this down so everyone in the family knows from now on, for the children and generations to come. And make sure Joshua hears it, too, so that he knows that I wasn’t ok with how they were treating you. I’m going to deal with this: ‘In the years to come I will surely wipe the enemy the Amalekites from the face of the earth for what they did to you here. I will even wipe away the memory of them.’”

Then, Moses built an altar and called it, “Yahweh-Nissi! The Lord is my Banner.” He said, “For a hand was lifted toward the throne of the Lord.”