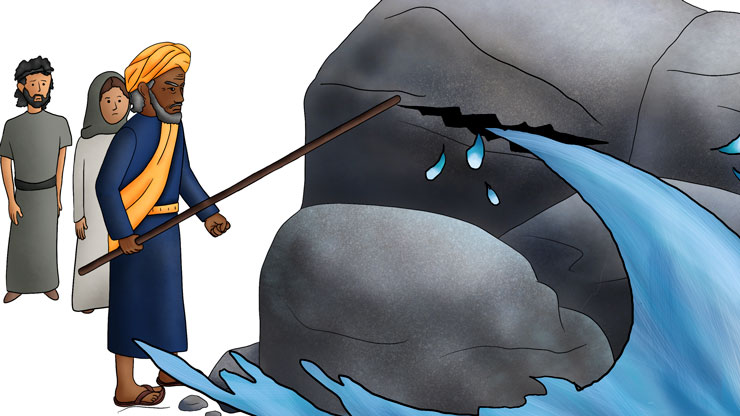 The Consequences Of Frustration

Moses : The Consequences Of Frustration

As the people were wandering, wandering, wandering around the desert, they ran out of water again. And instead of just sweetly asking for some, they gathered together against Moses and Aaron. They said, “Why have you brought us into this wilderness to die? There is no grain, or figs, or fruit; and there is no water to drink! We don’t like it here!”

Moses always had to choose to be patient with these fussing people. But, he wasn’t feeling very patient today. He was frustrated with them. But still, Moses and Aaron left the people and went and bowed down before God.

Then the Lord spoke to Moses: “Take your staff and call all the people together, you and Aaron. Then talk to the rock in front of them. The rock will pour out water for them and their animals to drink.”

So Moses took the staff and gathered the people together in front of the rock. He said to them, “Listen, you rebels! Must we bring water out of this rock for you?” Then Moses raised his staff, and hit the rock with it twice. Bam! Bam!

But God was not happy with what Moses did. He had told Moses to talk to the rock, not hit the rock. Moses had disobeyed.

Have you ever been frustrated and not obeyed your parents in a right way? Like if your dad asks you to put something down, but you drop it or throw it instead of placing it down gently. Well, that’s what Moses did. Most of the time Moses had obeyed God. He’d been patient and humble for a long time. But, he let himself get frustrated, and he wasn’t respecting God and loving the people at that moment. So instead of speaking to the rock, he hit it. That was disobeying.

God said to Moses, “Because you didn’t believe Me and treat Me as Holy (and right in front of everyone!), you don’t get to go into the Promised Land.”

“Ohhh!” Moses’ mind started spinning. “Not go into the Promised Land… after all this work and hard stuff.” His eyes went blurry with tears. He thought he might fall down it hurt so bad. This discipline was sting, sting, stinging. It really hurt Moses.

But, God was HOLY. And Moses needed to always treat God as Holy.

So without a warning and without a second chance, God’s discipline came. No more Promised Land for Moses.

Have you ever been disciplined for disobeying? Have your parents ever had to take away something you really wanted? It hurts, doesn’t it? But discipline is very important.

With no warning, Moses lost something precious that he could never get back. Moses had made a lot of really good choices all along the journey, hadn’t he? But he was still punished with no warning for disobeying.

God didn’t say, “I’m going to give you one more chance, Moses. I know I told you to strike the rock last time the people wanted water, so maybe you didn’t hear Me…” or “Maybe you didn’t understand Me, so I‘ll give you another chance.” Nope! That is NOT what happened, is it?

So you should be understanding when your parents need to do the same things for you. They have to lovingly give quick and unchangeable discipline sometimes, just like God does. And you have to be willing to accept that discipline with a good attitude, just like Moses did.

Moses lost a very special thing, but frustrations have consequences. Remember that the next time you have a choice whether to get frustrated and overreact, or not. Take a deep breath… and make the right choice.

(And you’ll see that God still loves Moses… and Moses gets to do some other very special things later. Just wait and see.)