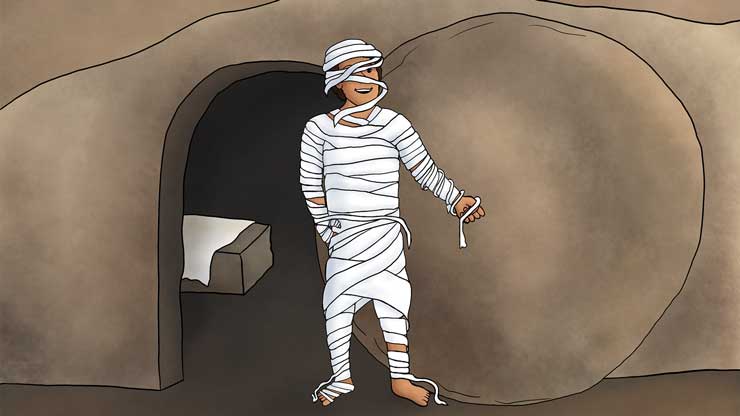 Do you remember Mary and her sister Martha? Mary and Martha had a brother named Lazarus, who loved Jesus a lot. Jesus loved him a lot too.

One day Mary and Martha sent a message to Jesus: “Jesus, our brother Lazarus, the one You love is very sick.”

I’m sure the news that His good friend, Lazarus, was sick didn’t make Jesus feel happy. And since Jesus had healed lots of people, you might think that Jesus rushed off to go help Lazarus. That’s what His friends wanted Him to do, and maybe even expected Him to do, but Jesus always turned to His Father to know what to do and say and feel.

Jesus said to them, “Lazarus is sick, but it won’t end in death. Instead this is going to show God’s glory and glorify His Son.”

After listening and waiting for one, two days… Jesus told His followers, “Let’s go to where Lazarus, Mary, and Martha live.”

“But Jesus,” His disciples said, “the religious leaders just tried to stone You to death! And You wanna go back there again?”

Eventually Jesus told them, “Yes, I do. Lazarus has fallen asleep, and I’m going there to wake him up.”

Now Jesus’ followers didn’t want Him to go since the last time He was there people had tried to kill Him. It seemed too risky to them, so they tried to talk Him out of it. “But, Jesus, if Lazarus is just sleeping, that will help him get better from his sickness.”

But Jesus told them, “What I mean is that Lazarus has died. And I’m glad for your sake that I wasn’t there, because this is going to help you believe. Come on. Let’s go to him.”

Thomas looked around at the others and said, “Well, come on. Let’s go, so that we may die with Jesus.” So off they went.

By the time Jesus and His disciples got there, Lazarus had been dead and in the tomb for four days. Four days!

Martha heard that Jesus was coming and she ran out to meet Him. “Lord,” she said, “if You had been here, my brother wouldn’t have died. But even now I know that whatever You ask from God, God will give You.”

Jesus looked in Martha’s eyes and said, “Your brother will come back to life.”

“When?” Martha thought. Then Martha said, “I know that he will come back to life again in the resurrection at the last day.”

Martha answered, “Yes, Lord, I believe that You are the Christ, the Son of God who comes into the world.”

When Mary heard that Jesus was asking for her, she quickly got up and went to Him. (Now there were lots of people at Mary’s house, and when they saw her leave, they didn’t know she was going to see Jesus. They thought she was going to the tomb to cry, so they followed her so that they could join her in crying at the tomb.)

When Mary got to Jesus, she fell at His feet crying and said, “Lord, if You’d been here, my brother wouldn’t have died.”

When Jesus saw Mary and the others crying, He got noticeably upset, heartbroken.

Jesus asked, “Where is Lazarus’ body?”

“We’ll show You,” some answered.

Jesus started to cry. Tears rolled down His face.

When the people saw Him crying some of them said, “Awww. Look how much Jesus loved him!” But others of them said, “This is the man who made the blind man to see! Couldn’t He have done something to keep Lazarus from dying?”

As they arrived at the tomb, Jesus was still noticeably heartbroken. Then Jesus said, “Roll away the stone.”

For some reason Martha felt like she needed to warn Jesus, so she said, “Jesus, he’s been dead for four days so his body will have started to rot and it will smell really, really bad in there.”

But Jesus said, “Martha, didn’t I tell you that if you would believe, you would see the glory of God?”

So they rolled away the stone. Then Jesus looked up to Heaven and said, “Father, thank You for hearing Me. I know that You always hear Me, but I said this for all the people standing around here, so that they may believe that You sent Me.”

Then, Jesus shouted in a loud voice, “Lazarus, come out!”

Uhhhhh… That probably made everyone feel a little uncomfortable. Lazarus wasn’t a little bit dead… he was a lot of bit dead. His flesh was already rotting. They could smell it. But then…

Lazarus came walking out! His hands, and feet, and face were all wrapped up with the cloth they’d buried him in.

Jesus told the people, “Untie the cloths to help free him of all of that.”

Many of the people who had come there with Mary believed in Jesus now.

But some of them went to the religious leaders and told them what Jesus had done. So then the religious leaders got together and said, “What are we gonna do? This man is doing many miraculous signs. If we allow Him to go on like this, everyone will believe in Him. And then the government will come and take away our holy place and our nation.”

Silly men. Trying to protect themselves — their pasts, their power, their positions — instead of letting Jesus lead them into a whole new life.

Jesus had just proven that He was the boss even over death. What more did they need? I’ll tell you what: NOTHING. Jesus, Himself, is the Resurrection and the Life… and He is ALL we need.

As you get older, you’ll feel how we are all “dead” in our sins and selfishness… and you may even feel like all you are doing is stinking up the place. But, Jesus offers us Resurrection Life — His Fresh Air! And one day, when He calls you to get up and Come Out of the grave, then you can get up and go out to Him. He can make your dead bones live. But you do have to come out when He calls. And you might need some help getting your old, stinky, grave clothes off, but you can Come Out of that stinky cave to the Fresh Life God has for you.