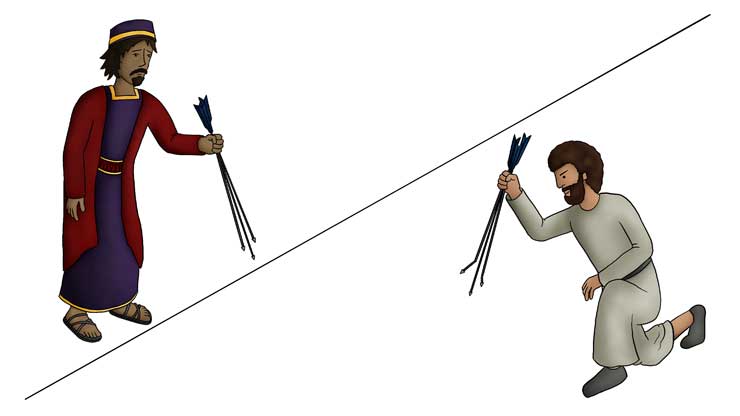 When It’s Your Turn to Step Up—POUND IT!

King Jehoash : When It’s Your Turn to Step Up—POUND IT!

Would you believe that at the same time that King Joash of Judah crumbled, a king with the same name (and the same spiritual problem) became the king of Israel. His name was Jehoash. (Which is just another name for Joash. This is what we told you about before. Same names, two different guys. To help you tell which one is which, we’ll call the King of Judah Jo-ash and we’ll call the King of Israel Je-HO-ash. Now let’s get on back to the story…)

God’s prophet Elisha had gotten very sick and was going to die. Jehoash the King of Israel heard about it and was so sad. He went to visit Elisha and cried, “My father, my father, the chariots and horsemen of Israel!”

Elisha wasn’t worried about dying, but he did want to help Israel with one more thing. Times were changing. So Elisha wanted to help Jehoash see that it was his turn to step up and lead.

He told Jehoash, “Get a bow and some arrows.” So Jehoash obeyed and got the bow and arrows.

“Now aim the bow,” Elisha said. So Jehoash aimed the bow, and Elisha placed his hands over the king’s hands as he held the bow.

“Now shoot!” Elisha said. So Jehoash shot an arrow out of the window.

“Now take these arrows,” Elisha said. So Jehoash took the arrows and held them in his hand.

Hmmmm… We have to look a little deeper than just obedience, don’t we? Have you ever been corrected for having a wrong or uncaring attitude even though you obeyed? I think it’s kinda like that.

Could it be that Elisha knew what it looked like to go after God’s Glory with all your heart when God tells you to do something? So when Elisha saw that King Jehoash’s response was just a tap, tap, tap those arrows, he was furious because it showed that Jehoash didn’t really have the conviction and passion for the battle himself.

When God asks you to do something, it’s not enough to just yawn and say, “Yeah, sure. Okay. Hit the arrows. Yup. Okay. Did it. What next?”

And do you remember what we told you our real enemies in life are? Yup. Sin and satan! God wants to help us and give us His Glory and Life, but if we only tap, tap, tap, and do “just enough” or try to do “better next time,” God can’t do ALL He wants to do in us.

Then Elisha died. King Jehoash did win some battles over his enemies, but only 3 times, when it could have been and should have been so much more! Too bad.