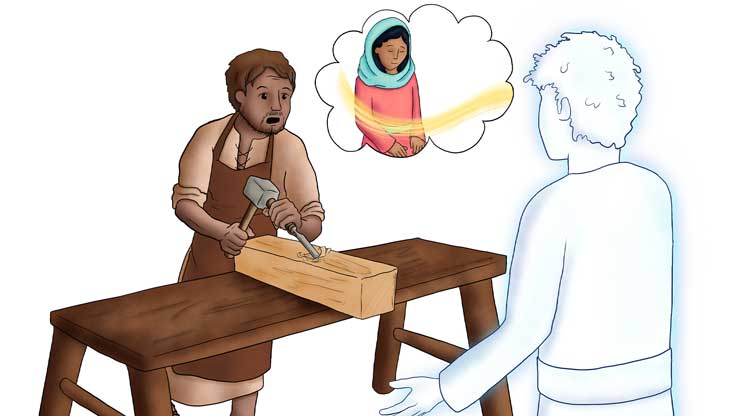 At the time when the angel came to Mary and told her that she would be Jesus’ mommy, Mary was engaged to be married to a man named Joseph.

At first, Joseph didn’t believe Mary was telling the truth about the Messiah, baby God, being in her tummy. He thought she was lying. Joseph was a righteous man who wanted to make God happy. He didn’t want to make God sad by marrying a lady who would not be truthful with him. He was thinking he would have to cancel the wedding with Mary.

As Joseph was thinking about all this, he fell asleep and had a dream. In his dream an angel came to Joseph and told him, “Joseph, son of David, do not be afraid to take Mary as your wife, because the child in her tummy is from the Holy Spirit. She will give birth to a son and you will name Him Jesus, because He will save His People from their sins. This is what Isaiah the prophet told about when he said, ‘The maiden will give birth to a son, and they will call Him Emmanuel,’ which means ‘God with us.’”

When Joseph woke up from that dream, he was ready to do all that the angel told him. This is what had been promised — a Savior! This is what they had hope, hope, hoped for!

So, Joseph took Mary as his wife. He was honored to be the adopted daddy of this little special baby, Jesus.