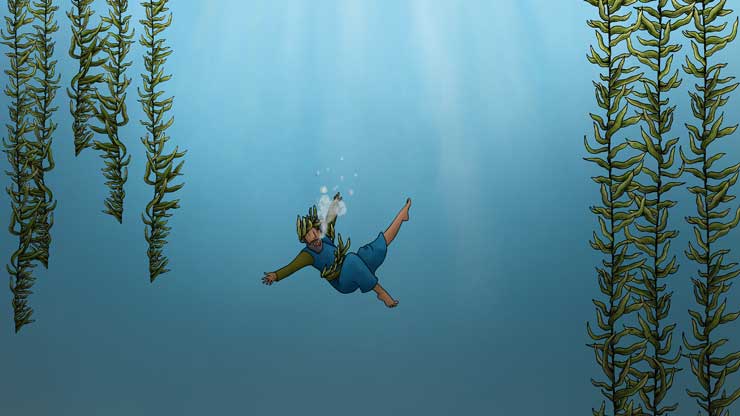 Eaten by a Fish to Learn His Lesson

Jonah : Eaten by a Fish to Learn His Lesson

“Jonah,” God said, “get up! Go right away to the big city called Nineveh. I see how wicked the people there are, and I need you to go and tell them that what they’re doing is wrong. They need to turn away from sin and turn towards Me.”

But Jonah didn’t want to help the people of Nineveh. They were Assyrians, enemies of Israel. And they were known for being extremely wicked and mean.

So instead of obeying, Jonah decided he would run away. God said, “Go east,” but Jonah went west. He went the OPPOSITE direction of what God told him. (Bad idea, Jonah.)

Jonah thought if he just jumped on a boat and sailed fast in the opposite direction that he could get far away from God. But of course Jonah couldn’t really run away from God, could he?

Do you know what happened when he got on the boat? God sent a strong storm with huge wind and waves to get Jonah’s attention.

But that strong storm got all the sailors’ attention, too! They said, “Why did God send this storm?! Did someone disobey Him? How can we make this storm stop?!”

The sailors started throwing stuff over the sides of the boat to make their boat lighter, but it didn’t help. And, Jonah just slept through it all. Eventually they woke Jonah up, “Wake up, dude! Pray to your God! We’re going to drown!”

Jonah knew that God had sent the storm because he had disobeyed. But apparently he wasn’t ready to turn around his attitude and repent. So eventually he told the sailors, “Just throw me off the boat into the water, and the storm will stop.” The sailors didn’t really want to do that — Jonah would probably die! But they couldn’t think of anything else to do. And the storm only got worse and worse! So finally, they agreed and threw Jonah into the water. Splash! And just like that, the storm stopped.

And just like that — a whole boatload of sailors were in awe of Yahweh and recognized Him as God! But now… Jonah was in the water!

Jonah tried to keep his head above the water but the waves crashed over him. The waters swirled. Seaweed wrapped around his head. Down, down, down Jonah sank deep into the sea. He was so deep now that he could see the bottom of the underwater mountains! Jonah was sure he was going to drown, never to rise again from that dark, dark place. He cried to God, “Help me!!!”

Just when Jonah thought he couldn’t hold… his… breath… any longer… a HUGE fish swam up and swallowed Jonah — whole — GULP!

While Jonah was still in the stinky, slimy, wet, cold, very, very dark tummy of the fish, he talked to God. This is what he said,

“From the deep dark world of the dead I called for help, and You heard my crying. Currents swirled around me; waves swept over me. I said, ‘I have been shut out from Your sight so that You can’t see me, God; but I will look toward Your Holy Temple.’ The deep, dark bottomless pit surrounded me; seaweed wrapped around my head. To the bottom of the mountains I sank down, down, down; the gates of the grave barred me in forever. But You, Lord my God, brought my life up from the pit. When my life was drifting away, I remembered You, Lord, and my prayer went up to You, to Your Holy Temple. Those who cling to worthless idols lose out on Your grace and mercy. But I, with shouts of grateful praise, will sacrifice to You. What I have promised I will make good. I will say, ‘Salvation comes from the Lord.’ ”

God still had a job that needed done. And he still wanted Jonah to do it. So, God gave Jonah a second chance. He said to Jonah, “Get up, Jonah! Go right away to Nineveh. I will tell you what to say to the people when you get there.”

God still asked Jonah to do the same thing he asked him in the first place. Would Jonah do it this time? Oh, yes! This time he jumped up and headed in the right direction.

Into the big city of Nineveh Jonah went. Alone. He was the only person there who knew God. He was the only one God sent to talk to the 120,000 people there! For 3 days Jonah traveled throughout the city and told the people everything God said, including that they would be destroyed in 40 days for being wicked.

As Jonah talked, something very special happened. All those people realized that they were drowning in the deep, deep darkness of sin. The whole city listened, and changed. A whole city, all at once — 120,000 people. That’s awesome, huh?!

When God saw how they were sorry and turned from their evil ways, He changed His mind about destroying the city. He was oh so glad to not have to punish them anymore.

Can you see that the book of Jonah isn’t just a story about a man and a big fish. But we have to be deep thinkers to See that. For example — What does it show us about Jonah that he’d rather be thrown into the sea than obey? And what does it show us about God that He didn’t let Jonah drown or be chomped in two by that fish? And why did God pick this man? Maybe what happened to Jonah was to show him and us that we’re all in the same boat. We’re all drowning in the deep dark waves of sin. We’re no different. Salvation ONLY comes from the Lord God. And none of us are ever too deep for Him to save, if we turn to Him for help.