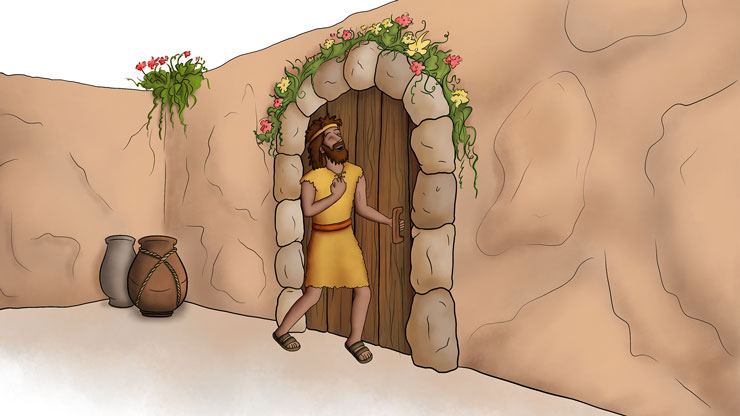 John the Baptizer : Joyful Not Jealous

God had sent John the Runner ahead of Jesus to prepare the Way for Him. And John had been very obedient to God and was doing everything God wanted him to do. God had asked John (the Runner and Baptizer) to shout out the good news to the people and tell them to repent of their sins and be baptized. As John did this, many, many people came out to the desert to be baptized by John.

From the very beginning John knew that while this Work was very important to God, that did not mean he was big stuff. This was not about him. It was always about the Shining Rescuer, the Messiah, the One coming after him. Remember how John said, “I’m not that guy. There is Someone coming who is so much greater than me that I’m not even good enough to untie His shoes!” That someone was… Jesus!

One day, after Jesus had started teaching and baptizing people, some of the guys following John came to him and complained, “That man, Jesus (that you baptized)… well, now His followers are baptizing people too. And even more people are going to Him than are coming to us!”

Uh-oh! Wrong thinking, huh? Do you think John thought, “Hey, God gave ME the job of baptizing!”? Do you think he started feeling sorry for himself or jealous and said, “I’ve been working hard all this time and now someone else is starting to do my job and get all the attention”? No, no, NO!

John was NOT in it for the “attention” or for “winning” or to be recognized. John was there ONLY to point people to Jesus. To help them run down that narrow path to the Savior, the Rescuer. Listen to what John says to his disciples.

John responded to his disciples, “I have told you all along that I am not the Rescuer, the Messiah. I was only sent to clear the way for Him. You know that.

“The bride belongs to the bridegroom. The bridegroom’s friend waits and listens at the door for him and is full of joy when he hears the bridegroom’s voice. I’m that friend! That joy is mine! It brings me so much joy that my joy is totally filled up to the top! Jesus must become more and more important, and I must be become less and less important.

“Here’s the reason why: The One who came from above is above all, everyone and everything. But someone like me, who came from earth, I just speak words that come from earth. But, the One who came from Heaven is telling you what He has seen and heard from Heaven! And anyone who believes HIM joins himself to what God said and agrees God is True. The One God sent speaks God’s words and God gives Him His Spirit without limit. The Father in Heaven loves His Son, Jesus, and He has placed everything under His Son’s control. So whoever believes in the Son of God has forever-Life, but whoever does not obey the Son or come under the Son’s control, will not experience life.”

John could see very clearly that less of him meant more of Jesus. And that’s always a very, very GOOD thing.

Less of little old me… and more of Him… Good, Good, Good. And someone who is a friend of Jesus, the Bridegroom, is nothing but HAPPY about that.