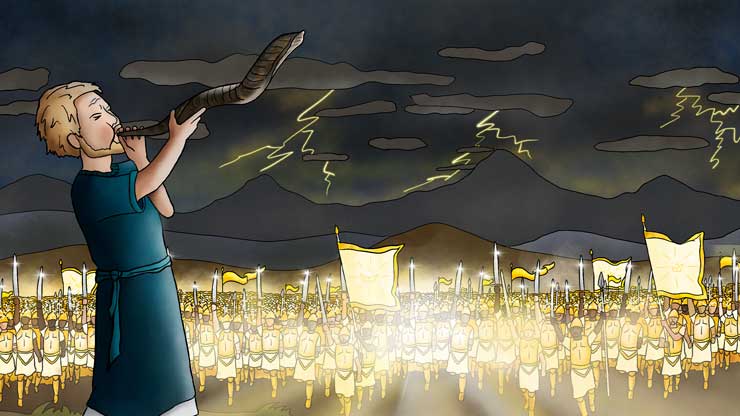 Joel was a Heaven-seer who talked about the Day of the Lord. When you read what Joel wrote, it might sound a little confusing at first because he starts off by talking about a bunch of grasshoppers that were taking over the land.

But when you listen carefully, it starts to seem like those grasshoppers were a shadow-picture of something Special. Listen to find out:

Listen up everybody. Tell your children, so they can tell their children. And then those children can grow up to tell more children.

Has anything like this ever happened in your whole life? Grasshoppers have taken over your land and eaten up everything. Wake up! Look around you. They’ve taken over. Their teeth are like a lion’s teeth.

Crops won’t grow. Animals are dying. Water is drying up. It’s time to cry out to God because the Day of the Lord is close, and it will bring things smashing, thrashing, crashing down.

So, blow the trumpet in Zion. Let people feel shaky — because it’s time to get ready! — for the Day of the Lord is coming.

Yes, a day of dark clouds. Yes, a day of darkness and gloom. But, here they come! Like beautiful light spreading across the mountains with the sunrise, here comes a people, an army, huge and strong. There’s never been a people like this before! Nothing can stand in their way. They run like the fastest horses. They sound like chariots rumbling over the mountaintops. They’re an army ready for battle.

God was allowing some grasshoppers to swarm in and get the attention of these disobedient people. But does that sound like Joel was just talking about grasshoppers? No. Could it be that Joel could see ahead that the way those grasshoppers worked together doing God’s work was a little picture of God’s future Army?

When we aren’t making good choices, God has a mighty army that He can send to swirl around us and challenge us to cut it out and be soft to Him. God will do everything He can to help us. He loves us too much to leave us alone.

They leap over mountains. They charge like mighty men; they climb up walls. Each one marches in the path he’s supposed to. They do not break apart from each other. They do not push or jostle or bump into each other. They go straight, straight, straight ahead, side by side in perfect order. They rush over the walls and cannot be stopped by anything the enemy would throw at them.

God’s Army will follow His marching orders to bring everything under His control. They will march, march, march in step with each other. They will be in perfect peace and order. Not chaotic and crazy. They won’t waste any energy pushing, bumping or bonking into each other. All their energy will be for moving forward! No matter what the enemy throws at them, they will not stop. And nothing can separate them — they will stick Together exactly in formation, the relationships God has planned for them.

The ground quakes; the sky shakes, the sun and the moon refuse to shine. And the voice of the Lord thunders as He leads His Army.

He has so many warriors! What He commands will be done. Yes, the day of the Lord is awesome! Who can survive this day?

God cried out to them, “It’s not too late. Come back to Me with all your heart, with fasting and crying and deep sadness. Rip open your hearts, not just your clothes.”

Then Joel tells them, “Go back to God for He is gracious and merciful and Super kind. He’s slow to get angry and has limitless loyal love. He often backs off of devastating punishment. So who knows? If you run back to Him, maybe He will show undeserved kindness and leave a blessing for you.”