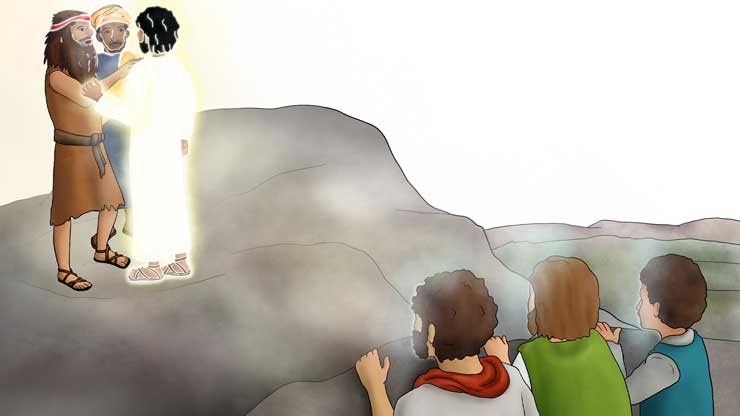 Jesus, the Word of Life

Jesus, the Word of Life : Not Just Religion

A little while later Jesus took Peter, James and John up on a high mountain to be alone to pray.

As the men watched, Jesus’ appearance was changed. He looked different. He was beautiful, awesome. His face shone like the sun, and His clothes became a dazzling white, like bright light or a flash of lightning.

Suddenly, Moses and Elijah appeared and started talking with Jesus. They talked about what was about to happen to Jesus in Jerusalem. Peter, James and John were very sleepy (especially Peter), but as they woke up, they saw Jesus’ glory along with the two men standing with Him.

Peter, not really knowing what he was saying, burst out, “Lord, it’s wonderful for us to be here! If You want, I’ll make three monuments — one for You, one for Moses, and one for Elijah.”

But as Peter spoke, a bright cloud came down and covered them. And a voice from the cloud said, “This is My dearly loved Son, who brings Me great joy. Listen to HIM.”

The disciples were terrified and fell face down on the ground. But Jesus came over and touched them. “Get up,” He said. “Don’t be afraid.”

When they looked up, Moses and Elijah were gone, and they saw only Jesus.

Today there are many people who want to say that Jesus was just another good teacher or a good man, just another Moses or Elijah. But that is not what God said, is it? God made it very clear: “This is MY SON! Listen to HIM! He is the Way, the ONLY way to Me, the Father.”

As you grow up, you’ll find out that there are 10,000 voices and teachers and opinions out there about God and religion and how to be saved.

But if you want to know what to do with your bad attitudes and the sin that trips you up so easily and makes you sad, then it is Jesus, the Son of God that you must listen to. He’s the one who knows what He’s talking about.

And pretty soon in our big story, the Father is going to confirm that by letting Jesus be killed, but then bringing Him back to life, raising Him from the dead.

If you want to see the power of God in your life, LISTEN to Jesus. He has the words of Life — He IS the Word of Life. Do what He says. Listen to the One who was raised from the dead. He is the One and Only Way.

And if anyone tries to get you to listen to the 10,000 other voices, then if I were you I’d tell them, “Until you can tell the storm to be still, and make little become much, and walk on water, and until you are raised from the dead, I’m going to listen to JESUS.”

As they went back down the mountain, Jesus commanded them, “Don’t tell anybody what you just saw until I have been raised from the dead.”

So they didn’t tell anyone, although the three of them did talk about what “rising from the dead” meant. They weren’t quite sure… at least not yet.