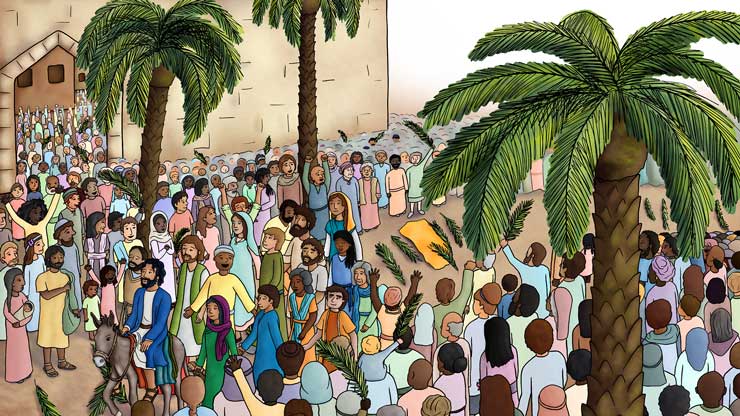 After being with Lazarus, Mary, and Martha, Jesus and His disciples headed to Jerusalem to celebrate the passover party. When they came to a little town outside of Jerusalem, Jesus said to two of His disciples, “Go into the village and you will see a donkey and her colt tied up. Untie them and bring them to Me.”

The disciples obeyed right away. Not long after, they returned to Jesus with the donkey and the colt. “Here Jesus! We found the donkeys just like You said.” Then they took off their jackets and put them on the donkey’s back to make a nice, soft seat for Jesus to ride on.

(The disciples didn’t remember this at the time, but 500 years before this, the Heaven Seer named Zechariah said, “Your king is coming to you, bringing justice and salvation, humbly seated on a young donkey.” And here was Jesus doing just that. This is the guy!)

A large crowd was in Jerusalem for the passover party. And the crowd was excited! News of Jesus and how He had raised Lazarus from the dead was spreading. The people had heard Jesus was on His way there, and they were hoping He was their long-waited-for Rescuer and King.

As Jesus entered Jerusalem, the whole city went into an uproar, saying, “Who is this?” “This is Jesus, from Nazareth in Galilee.” “I saw Him raise my friend Lazarus from the dead!”

As Jesus rode the donkey into Jerusalem, people ran out to meet Him and the crowd got bigger and bigger and bigger. The religious teachers said to one another, “This is crazy. The whole world has run off after Him!”

Does this sound like a fun day for Jesus? Jesus IS going to defeat the enemy and He IS going to reign as King, but things are not going to end up looking like what this excited crowd wanted. (Because this problem of people’s sin still has to be dealt with.)

The people in the crowd grabbed palm branches off of trees and took off their jackets and spread them out on the road in front of Jesus. (This was their way of throwing a big, kingly parade for Him.)

The people began to shout, “Hooray! Hosanna to the Son of David! Blessed is the one who comes in the name of the Lord. Blessed is the King of Israel. Hosanna in the highest!”

Hosanna means, “O Lord, save us!” The people were celebrating, shouting “hooray” that their king had finally come. They’d been waiting for so long for the promised Son of David to come and lead their nation in glorious strength in the likeness of King David from long before.

And here was Jesus with a Glorious Strength like no other. This one they had heard so much about. This one who was doing all kinds of miraculous and wonderful things. And He didn’t come into town acting like a big shot on a mighty steed with banners and trumpets, but He came into town humbly riding on a lowly donkey.

This man, full of humility and grace, yet strength and wisdom, was incredibly attractive. The people cheered, danced, and some even cried tears of joy.

“Blessed is the King who comes in the name of the Lord! Peace in Heaven and glory in the highest!”

But some of those who considered themselves to be rule-experts said, “Teacher, scold Your followers for saying that!”

But Jesus told them, “If they kept quiet, the stones along the road would burst into singing and shouting and cheers!”

But, as Jesus approached Jerusalem and saw the city, tears started flowing from His eyes. He was sad. He said, “O Jerusalem, Jerusalem, how I wish today that you of all people would really understand the way to peace. But it’s too late now. Peace is hidden from your eyes. Before long your enemies will come against you from every side. There won’t be a single stone left in place, because you didn’t recognize it when God came and visited you.”

What do you think Jesus meant? The people were cheering for Him as the Son of David. They were treating Him like a king. But Jesus was sad because He knew that they didn’t really See with Heaven-Eyes that GOD, Himself, was right there in front of them, offering them the way to Peace.