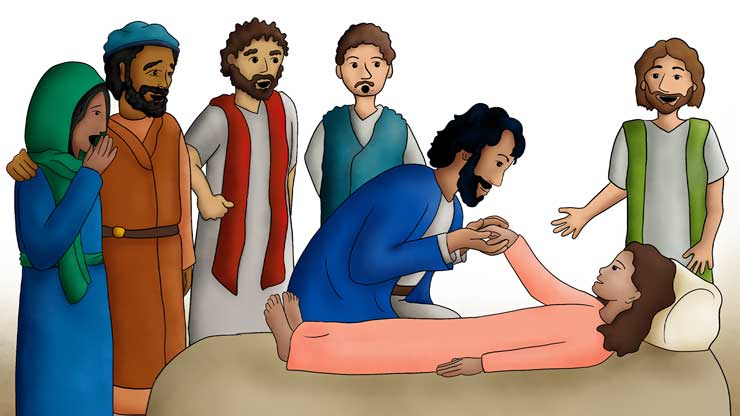 Learn to Trust and Rest

Jairus & His Daughter : Learn to Trust and Rest

One thing that happened just before the lady with the tummy ache, was that a man named Jairus came to Jesus. (Jairus was one of the leaders at the religious place in town.) When Jairus found Jesus, he fell at Jesus’ feet and begged, “Please, oh please, come quickly! My little girl is so sick. She’s about to die. Please come. Put Your hands on her so that she can be healed and will live.”

Jesus said He would and started off with Jairus.

Jairus said, “This way, Jesus. Please hurry. Hurry.” But the crowd was so big. There were people pressing all around Jesus. And while they were on their way to Jairus’ house… that’s when the lady with the tummy ache reached out and touched Jesus.

As Jesus was still talking to the woman about her healed tummy, some men arrived from Jairus’ house. Sadly, they told Jairus, “Jairus, don’t bother Jesus anymore. It’s too late. Your daughter has already died.”

I’ll tell ya something that very few people realize. Things are more likely to “work out” for Good if you trust, rather than worrying. It may not work out the same way that you thought it should, but trusting Jesus is always the way things work out the Best. That’s what Jairus is about to learn.

Jesus paid no attention to what the men had said about Jairus’ daughter having died. Jesus looked straight into Jairus’ eyes and said, “Don’t be afraid. Just believe.”

After that, Jesus sent the crowd away and only let Peter, James, and John go with Him the rest of the way to Jairus’ house.

When they got there, there was lots of noise and confusion and very loud crying. A large crowd of people had heard what had happened and had gathered around Jairus’ house. Jesus said to them, “Why are you all crying so loudly? The little girl isn’t dead. She’s just asleep.”

Not only did the loud, crying people not believe Jesus, they all started laughing at Him and making fun of Him. “Asleep? Yeah right! Like we can’t tell when someone is dead?!”

Then Jesus moved close to the little girl, and ever so gently took hold of her hand… and said sweetly, “Little girl, it’s time to get up!”

Immediately the little girl got up and started walking around. Jesus said with a chuckle, “She’s hungry! Get her something to eat.”

Do you think Jairus was glad that he was patient and that he believed Jesus? Yup. It’s always best to be patient, and trust, and rest.