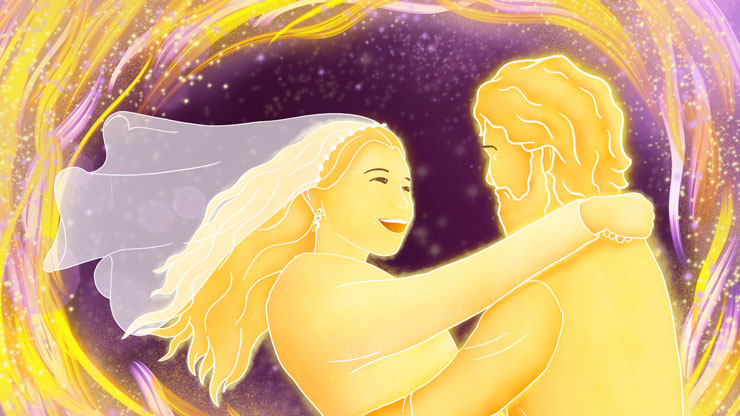 I will greatly rejoice in the Lord; I will be overjoyed because of my God. For He dresses me in clothes of deliverance; like a bridegroom in special clothes, or a bride when she puts on her jewelry.

For just as a garden gives fruit, so the Sovereign Lord will cause righteousness to grow, grow, grow. He will give His people reason to praise Him in the sight of all the nations.

Nations will see that you have been made right, and all kings will see your radiance You will be called by a new name that the Lord Himself will give you.

You will be a majestic crown in the hand of the Lord, a jeweled crown in His hand.

Like a young man marries a young woman, so will your builder marry you. Like a bridegroom rejoices over a bride, so your God will rejoice over you.

I have posted lookout men on your walls, My City; they won’t be quiet all day and all night.

You who pray to the Lord, don’t be quiet now! Don’t allow God to rest until He shows His Bride to be True and makes her the praise of the earth.

The Lord promises: “I will never again give your food or juice to your enemies. Those who harvest the grain will eat it, and will praise the Lord. Those who pick the grapes will drink the juice.”

Come through! Come through the gates! Prepare the way for the people! Build it — build that road! Get the stones out of the way. Lift a flag to the nations to see, see, see!

Look! The Lord tells the entire earth: “Hey! Tell My daughter Zion something for Me, tell her, ‘Look! The One who will free you comes! Look! His reward is with Him, and goes before Him!’”