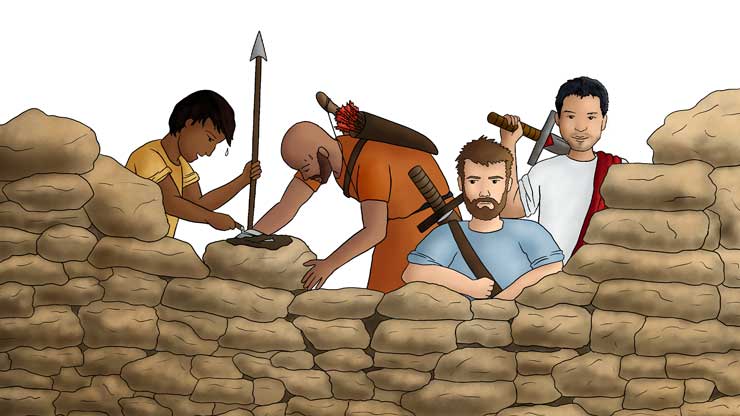 Stands as One to Defend the Walls

God's Family : Stands as One to Defend the Walls

Along came God’s enemies… again. There were some people who didn’t want the walls to be fixed — enemies of God and enemies of God’s Family. Two of the enemies were named Sanballat and Tobiah.

They wanted to break the walls. They said mean things to the people who were working hard to build. (God’s enemies are so predictable, aren’t they?)

Sanballat said, “Who do these guys think they are? Do they think they can just do this job in a day? Can they bring these burnt stones to life again from this pile of dust?”

Tobiah laughed and said, “Yeah. Their wall would crack and crumble if a little fox jumped on it!”

Are you thinking, “What is their problem? What do they care?” Well, I’ll tell ya. Because satan wants no Wall and wants no one to be protected by the Wall.

The enemies didn’t mind the Shining Survivors coming back to the land — until that wall started going up. That wall meant there’d be a City, a People. That wall meant protection. Not just anyone could wander into the City.

That wall meant a separation line between God’s Family and the world.

Satan will always attack the oneness God intends for us. He did it then, and he does it now.

And you’ll find out later, when Jesus comes into this story, that Jesus would build some Protecting Walls like no others before — His Church functioning together in Oneness! But Jesus’ Church is NOT physical stones or walls or buildings or steeples. Jesus’ Church is a People Built together by His Holy Spirit — with Supernatural ONENESS and Set-Apartness.

That’s the wall satan wants to tear down because he knows that our Oneness is what will be the end of him and his little, evil kingdom. So, he’ll use any means he can to come against God’s walls of protection.

So just remember that these things back then in Nehemiah’s time were a SHADOW of the REAL thing now. You aren’t living in the shadow times of this. YOU are living in the REAL times. Keep watching and listening. You’ll see. God’s Church the way it’s really supposed to be — His Family standing together as One — if you ever want to see that in your lifetime, then you have to be prepared to defend it.

But the people prayed, “Hear that, God? Don’t forgive and forget this sin of Your enemies. They have bitterly offended the builders.”

And the people kept on building. And the gaps in the wall got smaller and smaller. And the walls got higher and higher.

Eventually the wall went all the way around the city and was up to half its final height. The people worked with enthusiasm (that means happy energy)!

When the enemies, Sanballat and Tobiah heard that the walls had been joined together — no more gaps — and that the work was moving along, they were mad. They said, “We will gather fighters to come in and tear up their wall and hurt their workers.”

But some of the people heard about it, and warned Nehemiah. So he put guards at the low and vulnerable places in the wall so that no one could sneak in. He positioned the people by families, with their swords, spears, and bows.

Then he stood up and said to the people, “Don’t be afraid of your enemies. Remember our great and awesome Lord. Fight for your brothers, your sons, your daughters, your wives, and your families!”

When the enemies heard that the people knew all about what they were plotting, it was clear that God had frustrated all their nasty plans.

So God’s Family returned to the walls, each to his own work.

Do you realize how important it was that every single person worked hard and filled the gaps in their part of the wall?

What would happen? Yeah. When the enemies came to look for weak spots in the wall, they would FIND one, and ATTACK it.

All of the enemies would be able to sneak through that little sloppy part of the wall.

From that day on, half the people were doing the work and half were on guard with their weapons.

Those who were carrying heavy loads kept one hand on the work and the other hand on their weapon. The builders, to a man, had their swords strapped to their sides while they were building.

So on they worked. They started working in the morning when the sun was just coming up, and they worked until the sun sank down in the sky at night.