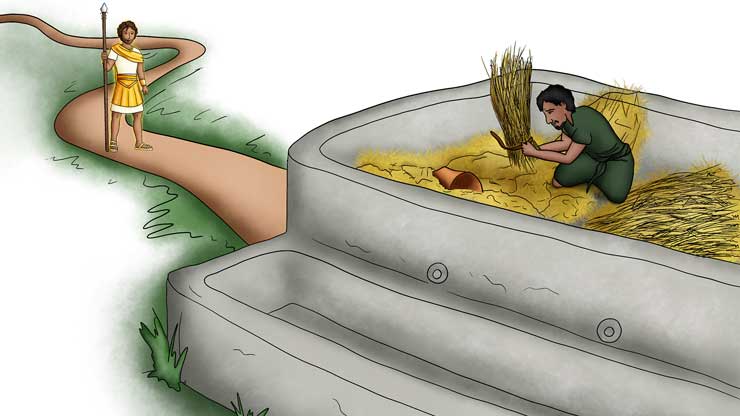 Chosen to Be the Answer to His Own Question

Gideon : Chosen to Be the Answer to His Own Question

God’s Children were in trouble again. Enemies were in their land. The enemies ate their food, squashed their crops, killed their animals, and took away their things.

This happened for seven long years.

Then, finally, the people said, “Help us, God, please! We need You!”

God heard them asking for help, and so He sent His Angel Messenger to talk to a man named Gideon.

“God is with you, mighty warrior!” declared God’s Messenger to Gideon. (Although Gideon didn’t know who was talking to him!)

“Uhhh… Excuse me… Sir,” said Gideon, “if God is with us, then why are these enemies in our land, eating our food, squashing our crops, killing our animals, and taking our things? And why is God not doing miracles to save us like He did with Moses and the Egyptians or like with Joshua at Jericho? Where are God’s miracles now?”

God’s Angel Messenger turned and looked straight at Gideon and said, “YOU! You go with the strength you have and get these enemies out of here. I am sending you.”

“What? Who? Me?” Gideon said back, “I’m not strong. My family is the weakest out of all the people, and I am the youngest in my entire family!”

Then the Lord’s Messenger said to him, “I will be with you. You are the miracle I will send to save the people now! You’ll beat your enemies as if you were only fighting against one man.”

Gideon was learning that whatever God says we can do… we can do, even if we’ve never done it before…

And whatever God says about who we are… is true, no matter what we think about ourselves.

And, whatever God says is possible… is possible, regardless of what anyone else thinks.