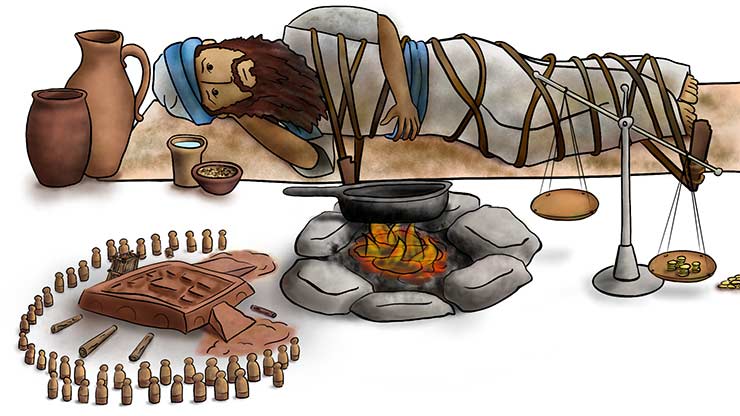 Ezekiel : The Man Who Ate a Book and Lay on His Side for a Really Long Time

While Ezekiel was in Babylon trying to talk to the people about their disobedience and discipline — Dooooo-to-dooooo-to-dooooo-to-dooooo! — God asked Ezekiel to do some very strange things, things that might have seemed “hard” or “weird” to Ezekiel. But it was VERY important that he obey anyway.

One time God told Ezekiel, “I want you to do exactly what I say. Now, open your mouth, and eat what I give you.”

Do you know what God put in his mouth? God put a little book in Ezekiel’s mouth! A BOOK! (It was actually a scroll. That’s an old fashioned book.)

Ezekiel didn’t argue or think he knew better than God. Ezekiel just ate the book exactly like God said. Do you know what the book tasted like? It tasted as sweet as honey!

After that, God’s Spirit picked up Ezekiel and whooshed him to the place where the disobeying, stubborn people were, so that Ezekiel could talk to them and help them obey God again.

Later, God asked Ezekiel to do another hard and uncomfortable thing. First God said, “Draw a picture of Jerusalem on a piece of clay. Then set up a bunch of little clay people, like a big army surrounding the city.”

Then God told Ezekiel to lie down on his side and let himself be tied down with ropes facing the little clay city.

Do you know how long God asked Ezekiel to stay lying on his side? OVER 1 YEAR! Do you know any little babies who are 1 year old? Well, Ezekiel stayed tied down with ropes for as long as that baby has been alive!

Seasons passed. Autumn, then winter, then spring, then summer, then autumn again, then winter again — and Ezekiel was STILL lying on his side.

He could have said, “I think it’s been long enough. Maybe I can just get up now.” But Ezekiel didn’t say that. He obeyed without complaining, and he didn’t get up.

When God finally did tell Ezekiel to get up, Ezekiel got up right away.

Next, God had Ezekiel shave off all his hair and beard and divide the hair up into 3 little groups. God told him to burn 1/3 of it in a fire, to chop up 1/3 of it with his sword, and to blow 1/3 of it into the wind! Does that sound like a funny thing to do?

It might sound funny, but, it wasn’t really funny. God was having Ezekiel do all these funny-sounding things as a picture to the people. He was having Ezekiel act out (like you might do in a play) how God was going to discipline them.

The “funny-looking” things were very painful and embarrassing, but they were a way for God to say through Ezekiel, “Look at Me! Listen, Listen, Listen to God! God is wanting to tell you something! Pay attention!”

Do you think Ezekiel understood ALL the reasons God had him do things like eat a book, and lay on his side, and cut off all his hair? Maybe, or maybe not. But, God always has a reason, whether we understand it or not. Our job isn’t to understand and know every reason, but to simply obey God with all our heart.