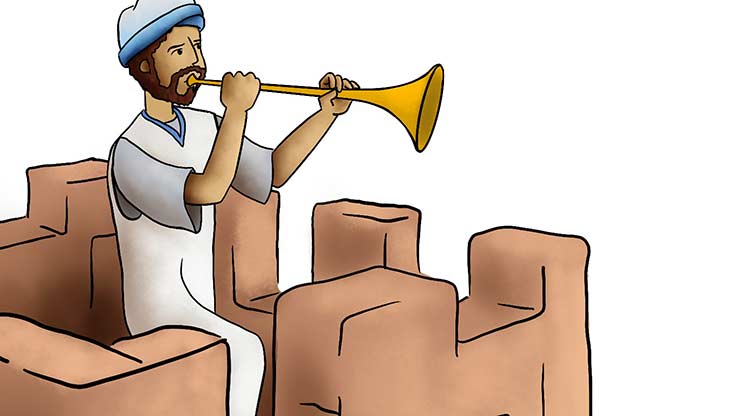 But what if the lookout-man saw danger coming and he did not blow the trumpet to warn the people?

Maybe he got scared and ran away to protect only himself.

Or, maybe he wasn’t paying attention and didn’t see the enemy coming.

Or, maybe he just blew on the trumpet a little soft blow because he didn’t like the noise of a loud trumpet.

Or maybe he never learned how to play the danger warning on his trumpet because he only liked playing “happy” music.

Then God told Ezekiel, “Ezekiel, I have made you a lookout for My Chosen Family, to warn them about the danger of sin and disobeying. Whenever I tell you something, you must warn the people for Me. Your words need to be like a loud trumpet blast — Dooooo-to-dooooo-to-dooooo-to-dooooo! Don’t let people get hurt and it be your fault because you didn’t warn them. Please, be sure to do your job!”

Have you noticed that prophets don’t always talk “nice”? God sometimes had them say and do things that were actually shocking, embarrassing, or gross.

They shouted in streets, howling like wolves and moaning like owls. Isaiah walked around barefoot and without clothes. Hosea married a running-away, unloving woman. Ezekiel cooked his dinner over a pile of cow poo. Why would God have His special prophets, His Heaven-seers, act so crazy or shocking or sometimes even offensive?

Most people think of themselves as pretty good people, so they need a little jolt or a wake-up call to take sin seriously.

Most people think, “I do more good things than bad things,” or, “Well, there are people who are worse than me, so that makes me a pretty good person.”

With everything that you’ve learned so far about God, do you think that is how God is going to judge people on that Final Day? No. Not at all.

So we often need some help seeing how far away from God we really are on the inside. Sometimes that might just involve hearing or saying some hard, or shocking, or seemingly embarrassing things.

God says through His Seers things like, “You’re naked! You’re heart is as dirty as if you had poop on your face. You are a runaway, unloving woman.”

God does that so that the people who wrongly think, “Hey, I’m a pretty good person” now have a chance to really consider how their sin separates them from God.

It’s God’s way to help people see, “Your ‘little sins’ are not just little mess-ups or mistakes — they are crimes against Me. A little selfishness here and there is just as much a crime against Me as stealing or murdering. And it’s hurting My relationship with you.”