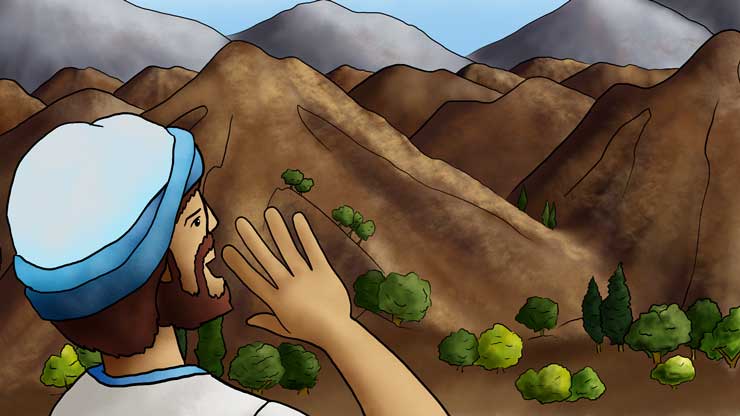 Did you know that God can talk to all of His Creations? Since the beginning, God told Creation what to do, and they listened to Him. He told seas to split open… and storms to calm down… and mountains to move.

Well, one day, God told Ezekiel to do some talking to the mountains for Him. God wanted Ezekiel to tell the mountains what was about to happen! Even though it hurt God to have to correct His disobedient Children, God had a plan to bring His Children back onto His lap after their discipline. And He was just bursting to shout out His plan!

‘Hey, mountains! I know people have been saying bad things about you because Babylon made you a big pile of rubble, a pile of trash. But, guess what? My Children are coming Home, Home, HOME!

‘I’m back again, mountains, and I’m on your side. You’ll be plowed and planted like before! The cities will be rebuilt and have people living in them again. The land will burst into life, life, LIFE. You’re going to be better off than ever.’”

Then God told Ezekiel, “When My Nation was living in their own land, they made it filthy by the evil things they did. So, rightfully, I got angry at them. I scattered the people of My Nation among the other nations. I spread them out across other countries. I had to punish them for how they lived and what they did.

“Then, wherever they went, they gave Me a bad name. People said, ‘These are God’s people, but He kicked them off His land.’ Ohhhhh, that really hurt. My name, My character, My Holy reputation was being smeared in the dirty mud in every country they went.

“So, Ezekiel, after you talk to the mountains, then it’s time to tell My people this: I have to save My reputation because you’ve made Me look so bad everywhere you’ve been. But now, I’m going to clean up the mess you made! The other nations will know that I am God because they are going to see with their very own eyes what I am going to do through you.

“Then, it’s bath time! SO, get ready for a scrub-a-dub-dub! I’m going to pour clean water all over you and scrub you clean of all your dirtiness of heart. Scrub-a-dub-a-dub-a-dubba! I will teach you to respect Me completely.

“Also, I will put a new way of thinking inside of you. I’ll give you a new heart. I’ll put a new spirit in you. I’ll remove that stubborn, stony heart you have and replace it with a heart of soft, alive, life-pumping FLESH. I’ll put My Spirit in you and make it possible for you to do what I tell you to do. Ohhhhh, I can’t wait! You’ll be My People, and I’ll be your God!

“But, by the way, I want you to know that what I’m about to do is not about you and anything you did right, because you never really did turn things around even though I disciplined you. You really humiliated Me, and you should be ashamed and embarrassed about how you’ve been.

“But once I wash away all your sins and dirtiness, we’ll start over. Then things will be better than ever. The empty land with no food growing will start growing food again. Then the people from the other nations will say, ‘This weedy mess has been turned into a Garden of Eden!’ And the ruined city that was smashed and wrecked to pieces will be alive, alive, alive! Ohhhhh, My Zion will be full of LIFE!

“Now, I’m going to let you, My dear-to-Me Children, ask Me to do this for you! Then those nations around you will know that I, the Lord, have rebuilt what was destroyed and have planted what was empty. I, the Lord, have said it, and ohhhhh, I will DO it.”