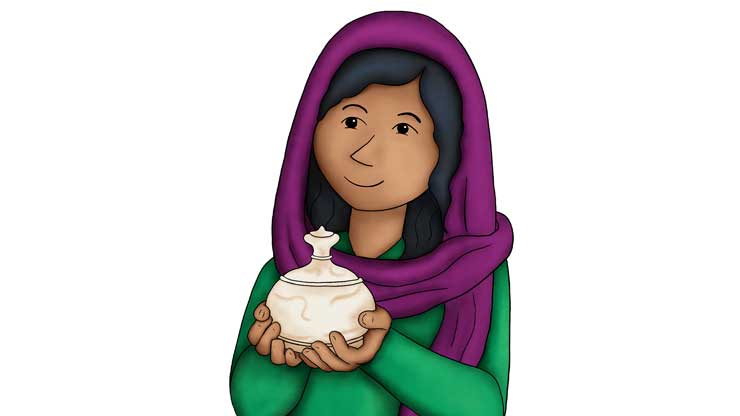 Give Jesus Your Future

Extravagant Love : Give Jesus Your Future

After Lazarus was raised from the dead, they threw a party for Jesus. I can only imagine what a happy party that would have been — feasting, laughing, dancing, asking Lazarus what it was like to be dead.

Mary, Lazarus’ sister, had brought something special with her to the party — a treasure. It was a sparkly white crystal bottle called an alabaster jar. It was sealed closed in a special way so that the only way to open it was to break it open. Inside was a sweet-smelling perfume. It was very expensive. It was probably the most expensive, beautiful, and special thing she would ever own!

While Jesus was eating dinner, Mary came up close behind Jesus. Then she did something that no one was expecting. She broke open her jar.

Mmmmmm. It smelled good. She began pouring the sweet-smelling perfume onto Jesus’ head. Slowly it flowed, flowed, flowed through Jesus’ hair, down His forehead, over His nose, onto His neck; she even poured it onto His feet and wiped His feet with her hair. Soft, soothing, smooth, warm and calming. The sweet smell filled the whole house. But that sweet smell was nothing compared to the sweet smile Jesus gave Mary.

You might be thinking this story sounds similar to the story about the lady who used her hair as a towel. And you’re right! (Good job at paying attention.) Remember how we told you that Matthew, Mark, Luke, and John all wrote down things they remembered of their time with Jesus? Well, each one of these four men told a story of a woman who poured perfume on Jesus. But the details in each of their stories is a little bit different. So we really don’t know for sure whether Jesus had perfume poured on Him just once, or twice, or maybe even more! But it doesn’t really matter. The important thing is that we learn something from what those men chose to tell us.

Many people think that this special jar was a treasure that Mary was saving for her future — either as a gift for a future husband, or something she might sell to have money later in life. If that’s true, then Mary wasn’t only giving Jesus a special treasure, but she was giving up her future plans. Without that money from the expensive perfume, she might never be able to get married, or she might not have enough money to live off of in the future. But by breaking open that jar, she was saying, “Jesus, it doesn’t matter what happens to me. I’m not worried about my future. I just want You to have this special thing of mine. You are my real treasure, and worth it. Totally worth it.”

I can only imagine how much Jesus loved this beautiful gift from Mary. Not because Jesus really loved perfume, but because Mary had the Heaven-Eyes to see that Jesus was the Christ, the Anointed One. And that He was deserving of all our treasures.

But a couple of people watching knew how expensive that little, crystal jar of perfume was, and they didn’t like it that she had broken the jar and poured it out. Judas, one of Jesus’ disciples who later turned against Jesus, said, “Why did you waste this expensive perfume? We could have sold it and given that money to poor people.”

(But, Judas didn’t say this because he cared about the poor. Really he was a greedy thief. Sometimes he would STEAL money from Jesus and His helpers’ money bag, so when he said, “Maybe we should give the money to the poor,” he was actually just wishing he could have taken some for himself. Booooo!)

Jesus scolded him, “Why are you bothering this woman!? Leave her alone. What she did was beautiful! You will always have poor people, but you won’t always have Me. She got to anoint My body for burial. And in the future, wherever people tell the good news about Me throughout the whole world, they will also tell this beautiful story of what she did.”

Mary poured the last drop out of the jar. She didn’t save back a single drop for a “rainy day.” Mary had poured out her future in extravagant love for Jesus, and not one drop of that was wasted.