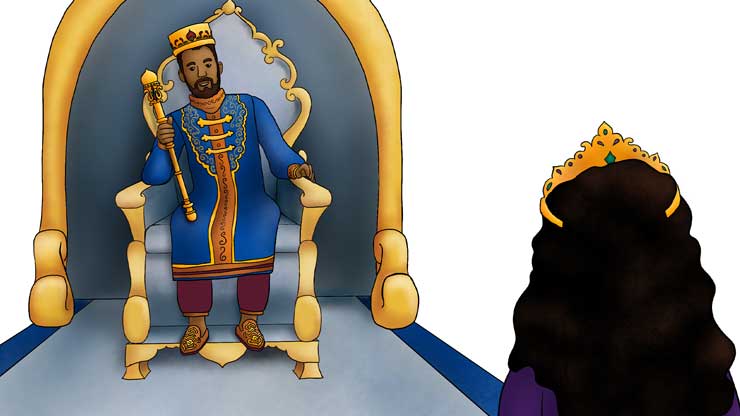 When Mordecai got Esther’s message, he let all of God’s Children in the city know what was happening, and they started fasting and praying for her. She would soon go before the king without being invited. If King Xerxes didn’t extend his scepter to her, she would not be allowed to live!

On the 3rd day of fasting, Esther knew it was time. She had all of God’s Family behind her (in their prayers and fasting).

Dressed in her best royal gown, she stood up tall, and gracefully entered the king’s throne room.

When King Xerxes saw Queen Esther coming toward him, he looked surprised. He had not called for Esther. She smiled a loving smile, and at this the king’s face turned… into… a smile, as he held out his scepter.

“Oh, what can I do for you, my lovely Queen Esther? You can have up to half of all my treasures! I want to do something special for you!”

Phewww! Esther was glad. Again God had given her favor with the king. But Esther was also very wise. She knew she needed to wait for just the right time to tell the king what she wanted. And this moment wasn’t quite the right time.

Esther said, “I would like you and Haman to come and eat a big feast I’ll make for you!”

The king quickly replied, “Wonderful! Someone find Haman so we can go to Esther’s feast.”

Esther prepared the biggest and fanciest and yummiest dinner you’ve ever seen! And the king and Haman really enjoyed it.

Again the king asked Esther, “What can I do for you, Queen Esther? Anything! Pick something wonderful from all my treasures.”

But Esther wanted something much more important than treasures, didn’t she? However, she knew it was still not quite the right time. So, she wisely answered the king, “Please, come again tomorrow for another feast, and then I will tell you.” The king agreed.

Haman left the fancy dinner feeling like big stuff. “What a nice dinner, so yummy, so…” Then he saw… Mordecai. Even though Mordecai knew how mean Haman was and knew of Haman’s plot and plan to kill him, Mordecai did not rise, or bow, or flinch, or shudder. And this made a happy Haman turn into a mad Haman.

“Errrrr,” Haman thought, “I do NOT like that Mordecai!” as he stomped home.

When Haman got home, he bragged to his friends and family, “Look at me. I am a great man in the king’s court! I was the only one invited to dine with the king and queen, and I’m invited again tomorrow! Errrrr! But that Mordecai is still around which is driving me mad!”

Haman’s family and friends had an idea. They told Haman, “First thing in the morning just go and tell the king that Mordecai needs to die — today. Then after Mordecai’s dead, you can go to dinner in peace.” That sounded like a good idea to Haman, so off to bed he went.

But that night, that very night, that same exact night, the king was having a hard time sleeping. Toss, turn, toss, turn. Eventually he asked if someone could read to him from the book of all the things that had happened while he was king. A servant read and read to him while he tried to sleep.

At that, the king sat up in bed. “Hey! Did this guy Mordecai ever receive any honor for how he saved my life?”

By this time it was very early in the morning (the king had been up all night). “Who is in the court to advise me about this?” the king asked.

“Uhhh, Haman’s in the court.” (We know why mean Haman is there early, don’t we? He’d come to ask the king about killing Mordecai.)

As Haman entered, the King said, “Haman, there is a man I wish to do something really special for. What special thing can I do for him?”

Now Haman was so prideful, he assumed HE was the special man. He said, “O King, you should have this man ride your best horse… and wear your royal robes… and he should be led around the town with someone shouting, “This is the man the king wants to honor!”

“That’s a great idea! Thanks, Haman,” the king said. “Now go. Do all that good stuff today for Mordecai.”

Haman was stunned. He was just about to tell the king that Mordecai should die, and now the king is telling him to honor Mordecai, leading him on a royal horse and in royal robes around town all day!

Haman felt rotten. (Because he was ROTTEN!) But he had no choice except to honor Mordecai — ALL DAY! So off he went… and up on the horse Mordecai went.

Mordecai knew that Esther was about to beg for their lives at dinner, and here Mordecai is riding on the king’s horse. What do you think Mordecai was thinking about all this?

I imagine Mordecai was just “riding it out,” following God’s breadcrumbs 1 step at a time all along the way. He didn’t know how all this was going to turn out. But, all he could do was just follow God’s leading and grace, and make right choices every day. Choices to be there watching over Esther. To keep showing up at the gate, even though he was HATED. To obey God and not bow down to Haman even if it cost him his life.

That night, Esther prepared another yummy feast for the king and Haman. As you can imagine, this time Haman arrived gruuuuumpy.

Again, the king asked Esther, “Please! Tell me what can I do for you? Pick anything up to half of all my stuff. I really, really want to do something special for you. Please tell me what I can do for you!”

Esther had been very wise to wait to tell the king what she wanted, huh? Because now, the king knew all about the goodness of Mordecai, didn’t he? So there was nothing the gruuuuumpy, mean Haman could say to change the king’s mind. Esther had waited for just the right time, and now, now, now was the time!

Esther dropped to her knees and humbly begged the king, “Please, O king, have mercy on me and allow me to live, along with Mordecai and all of my people! For my people and I will be killed because of a bad law!”

The king was shocked! “Who has dared to write such a law!”

Ohhhhh! The king was mad, mad, mad at Haman for making that bad rule! And Haman was terrified (as he should be). That very day Haman’s life was ended just the way he had planned to end the life of Mordecai and all of God’s Family.

After that, the king got a new friend and counselor! Can you guess who? Mordecai.

Mordecai got to live in Haman’s big house and got to wear the king’s robe and ring. The king wrote a new special rule about people who loved the 1 true God. They were now able to enjoy freedom and safety in the land. And all of God’s Children were glad, glad, glad.