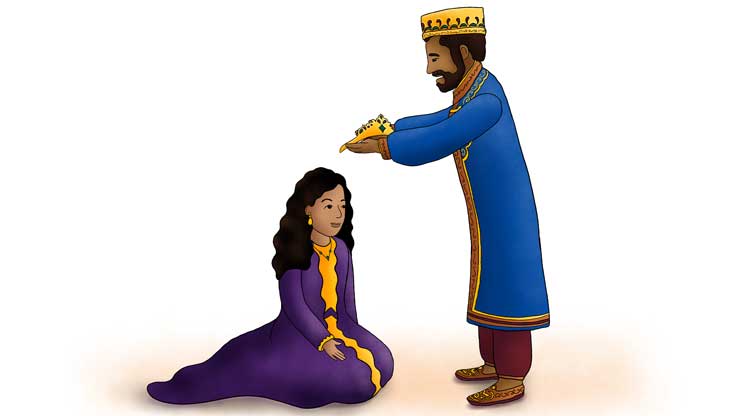 Queen for a Reason

Esther : Queen for a Reason

Once upon a time there was a little girl named Esther. (I say “once upon a time” because we don’t know exactly when this happened, just sometime around this time in our big story.)

Some might have said Esther was an orphan because both her mommy and daddy died when she was a child. But she wasn’t alone because a man named Mordecai took care of her and loved her like his very own daughter. Mordecai and Esther were Israelites, but they lived far away from Jerusalem (since Nebuchadnezzar destroyed it). They lived in the land of Persia, in the city of Susa.

One day when Esther was a little older, messengers came giving orders: “King Xerxes of Persia is searching the land for a new queen, so we are going to pick some of the young ladies to take to his palace. That way he can choose the lady he likes best to be his new queen.”

Some ladies stood up tall and smiled, hoping the messengers would pick them. They thought being a queen sounded kind of nice. But not Esther. She loved Mordecai and didn’t want to leave him.

Just then, for some reason, one of the messengers pointed at Esther, “You! You must come with us.”

“Who? Me? Oh no!” Esther thought. She didn’t want to go. She might never return home!

But it was the king’s order. So Esther had to leave Mordecai and go to the king’s palace. “Why, oh why is this happening to me?” she thought.

Even though Mordecai couldn’t be with Esther now, he was going to stay as close to her as he could. Every day, Mordecai would walk back and forth by the palace gate to see how Esther was doing. He wanted her to be safe and he warned her not to tell anyone that she was a Jew (sometimes Israelites are also called Jews or Hebrews).

Meanwhile, Esther waited for her turn to go before the king. For some reason, she started getting special attention from the king’s helper. She didn’t know what to think! But Mordecai told her to just go with it and follow the helper’s advice. So she did. And the more she did, the more everyone liked her! Esther thought, “This is a little weird. For some reason everyone is treating me so special. Why, oh why?”

When King Xerxes finally got to meet Esther, he REALLY liked her! He declared, “She’s the one! Esther is my queen!”

Wow, oh wow! For some reason Esther was chosen to be the new queen — out of all the young women in the kingdom!!

Now the king had a counselor named Haman. A counselor is someone who is supposed to help the king make wise decisions. But this counselor, Haman, was very prideful and mean. That doesn’t sound like a good person to have as a counselor, huh?

Haman started plotting and planning a way to hurt Mordecai and the other Children of God who lived in the land. He came up with a way to trick the king. “O King,” Haman said, “there are some living in the land who don’t like you and don’t want to obey you. I want to make a rule that says on a certain day we are allowed to get rid of these enemies of yours.”

What he had said about God’s Children wasn’t true, and Haman didn’t tell the king who he really wanted to kill and why. Since the king didn’t know what proud Haman was up to, the king just said, “Sure, do whatever you want.”

Then off Haman went, happy that he’d tricked the king into this bad rule. The rule stated that on one certain day, all the people of Persia could hurt, kill and take the stuff of any Israelites.

When Mordecai heard about proud Haman’s bad law, Mordecai was sad. He cried hard. He took off his soft clothes and put on scratchy old clothes and threw dust and ashes on his head to show just how sad he was.

Meanwhile, back in the palace, Queen Esther had not yet heard about Haman’s bad plan, but she had heard about sad Mordecai. She sent a messenger to talk to Mordecai to find out what was wrong.

Mordecai explained Haman’s evil plan to the messenger. “Tell Esther that we need her to go to the king and beg him for her life and for the lives of all our people!”

When Esther heard that message, right away she sent another message back, “But my dear Mordecai, there’s a rule in the palace. If I go to see the king without him asking for me to come, then I will die. This is the rule for everyone who appears before the king, even me! And he hasn’t asked for me to come to see him in a whole month! Only if he extends his scepter toward me will I be allowed to live. Otherwise, I’m toast!”

When that message reached Mordecai, of course he didn’t want Esther to be in danger. But, he knew that there was no other way. So back with another message the messenger went. It said, “Esther, don’t think that you’ll be safe just because you are queen! Perhaps the reason why, oh why, you were made queen was for this time, this place, this reason — right now?!”

Do you think it was an accident or coincidence that Xerses picked Esther to be queen, or do you think GOD was involved with the picking? God was involved, of course! And there are MANY things in the story of Esther like that, where God put Mordecai, Esther, and even Xerxes and Haman, in just the right places at just the right time.

Whoever wrote down the story of Esther didn’t write things like, “God did this” or “God said that,” even though God’s involvement is clear throughout the whole story. A Father, personally involved with His Children. That IS God. Remember that throughout your whole life. Your Father in Heaven knows all the reasons and all the Whys! Let Him lead you along His paths, and you just follow the breadcrumbs of His favor and grace (even if you don’t understand where the path is taking you).

Esther knew Mordecai was right. She sent a message back to him, “Mordecai, please ask all of our people in the city to pray with me. Let’s not eat or drink anything for three days. Then, even though it’s against the rules, I will go to the king. And if I’m toast, then I’m toast.”

Esther was going to be have to be courageous to do the job God gave her, wasn’t she?! All those “why, oh why” times in her life were just getting her ready for this Time, right now, when she was given the job of helping God’s Family in a big way.