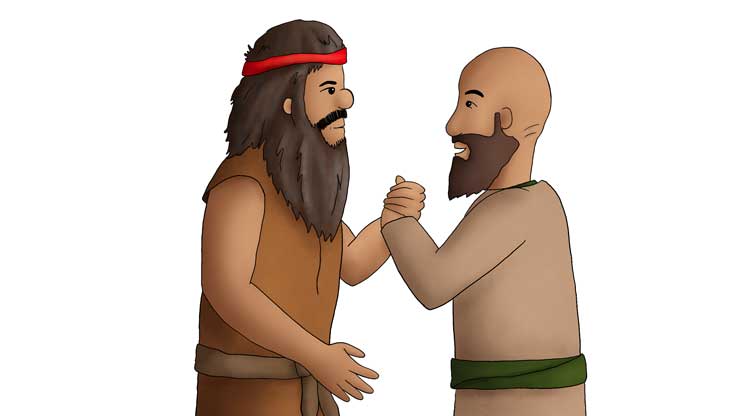 Part of God’s plan for Elijah was to give him a friend and helper who would take his place once Elijah was gone. So up on the mountain when God whispered to Elijah, one of the things He told him was, “Go find Elisha. He’ll be a helper for you, and will be My prophet after you.”

So Elijah went and found Elisha. Elisha was busy plowing his field when Elijah walked by and Whooosh! — threw his coat over Elisha and just kept right on walking.

(Elijah didn’t tell Elisha anything. But putting his coat on Elisha was like saying to him, “You’re getting my job next, young man. I’m passing on my coat. My work and responsibility and the opportunities with God — are coming to you!”)

Elisha ran after Elijah and said, “Let me kiss my father and mother goodbye, and then I’ll come with you!”

Do you think Elisha is going to go back to his house and cry about leaving his parents and his home? Do you think he’s going to look at his nice strong oxen and his brand new plow and think, “It’s sad that I have to leave these behind. I’ll just find someone to keep them safe for me while I’m gone.“

At first when Elisha says he’s going back to say goodbye, you might think that’s what he’s going to do, but listen to what Elisha actually does instead.

Elisha went back to his house, and quickly slaughtered his oxen. Then he made a big fire by burning his plow. Then he cooked his oxen on the big fire. He made a nice big steak dinner that fed all the people — his family and friends and everyone around.

Then, just like that, Elisha said goodbye to everyone and set off to follow Elijah and to be his servant.

Those oxen and that plow were Elisha’s livelihood. That means those were what he used to grow food, to make money, and to stay alive. When Elisha burned those things, he was putting everything on the line. He was showing that he was NOT going to look back.

When Elijah saw this response from Elisha, could it be his heart started Boom, Boom, Boom beating happily and excitedly within him? I imagine it did. Elijah had been feeling lonely. And now, for the first time in a long time, he’d found a friend, a kindred heart, someone who had Faith to put it all on the line, just like he had.