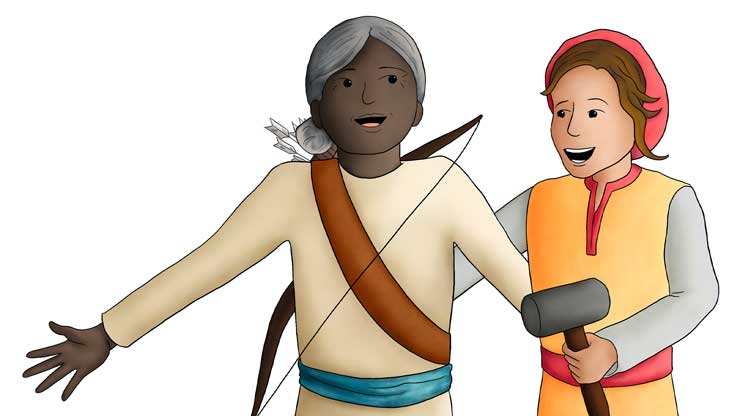 Show that Ladies are Warriors, too

Deborah & Jael : Show that Ladies are Warriors, too

As we mentioned before, sometimes God’s Children would get distracted and wander off the path He wanted them on. The Bible says they would just “do whatever seemed right in their own eyes,” which is NOT the same as obeying God. (That’s the tree of knowledge of good and evil that we don’t wanna eat from.) And when everyone is doing whatever seems right in their own eyes, they’re not being a Team, a Family, a People, which is what God really wants.

One of the judges was a lady named Deborah.

Deborah was a prophetess connected to God’s heart. She humbly served God. She would often make herself available to help the people by sitting under a palm tree. That way if the people had disagreements, they knew they could come to her for help. God gave her His wisdom to help resolve their problems.

One of the enemies in the land during the time of Deborah was a man named Sisera.

One day Deborah called a man named Barak to her and said, “I know that God has told you to go out there to fight Sisera and his army, hasn’t He?”

Barak answered her, “I’ll only go if you go with me, Deborah. Because I know that God is with you. But, if you don’t go with me, then I won’t go.”

Deborah answered, “I’ll go. But, just so you know, a woman is going to get all the credit for this victory against Sisera.”

Do you think that Deborah should have agreed to go into battle or do you think she should have just stayed at home and taken care of children and cleaned the house? Cleaning the house and taking care of children is a wonderful and very important job, but yes, Deborah was right to go into this fight. Even though men and women have different jobs to do in God’s work and in God’s battles, ladies are warriors, too. And Deborah would have been disobedient to NOT go. To say “no” to Barak, a man who wanted her to go, would have been disrespectful to him. So she’s going to go, too.

So Barak’s army went and attacked Sisera and all his men. God was with Barak and Deborah, and Barak’s army completely destroyed all of Sisera’s army.

Sisera was terrified when he saw his army was destroyed! He jumped out of his chariot and ran away from the fight as fast as his feet could run.

After a while of running, he came to the tent of a woman named Jael. Jael knew who Sisera was as soon as she saw him. Jael’s husband had made a deal with the enemy that they wouldn’t fight each other. But Jael knew that Sisera was God’s enemy and that made him her enemy too.

What do you think Jael should do? Do you think she should freak out and hide in her tent and pretend she isn’t home? No! This was a perfect opportunity to be a warrior-princess for her God.

She said, “Hey, Sisera, come over here. Stop and rest in my tent. Don’t be afraid.”

Does that sound like a risky thing for her to do? Maybe so. Jael had probably never been in a battle. She had probably never fought before. She was probably a quiet and humble lady. But she didn’t have time to ask Barak or her husband or anyone if this seemed like a “good idea” or not. Jael saw the chance to be God’s warrior lady. The chance for her to help defeat God’s enemy was now, and she had to decide in faith what she was going to do. So with calmness and poise and peace, Jael let Sisera into her tent.

Jael had Sisera lay down, and she hid him under a blanket. He was so tired and thirsty from all that running that he asked her for a drink of water.

Do you think she should give the enemy a place to hide and a drink of water? Well, don’t worry. Jael has a good plan. Just listen to what happens next. She doesn’t just give him water; she gives him a nice warm drink of milk.

“Mmmmmmm…. tasty. Warm milk. Soft blanket,” thought Sisera. His eyes started to droop and he started getting very sleepy. He said to Jael, “Stand guard at the tent door while I take a little nap.”

Jael agreed and went to the tent door, and waited. Then Sisera fell fast asleep.

Once Jael could tell that Sisera was sound asleep, she quickly picked up a tent peg and a hammer. She then tip, tip, tiptoed over to where Sisera was sleeping, and with all her strength — Bam! Jael killed God’s enemy.

Okay, I think we need to talk about this story for a minute. For starters, now that Jesus’ Kingdom has come, God’s Family doesn’t fight people with swords or hammers… Instead, we fight in our hearts against sin and satan. We fight for people’s lives to be free from sin. All these things that happened long ago were just “shadows” to show us how we should live in Jesus. The “shadows” teach us that we should have faith and grab hold of the promises of God. And one of those promises is that satan, God’s enemy, doesn’t have to scare us or control us. And, we don’t need to think someone stronger or braver than us should do the job of BAMMING him when we get the chance. When you get the chance to BAM God’s enemy, satan, DO IT!

Secondly, as we talked about with Ruth, men and women need each other. And it’s true that one of the things men do is take care of and protect women. And men covering over and protecting women is a wonderful and lovely part of God’s Big Plan. But women aren’t meant to hide in fear behind men either. Women are co-heirs, co-owners of all God’s promises. That means all God’s promises are for both men and women.

Jael saw what needed to be done, and quietly and bravely, she did it. She had a chance to take out the enemy, and in faith she took action before her chance to defeat God’s enemy was gone.

Sometime later Barak came running by Jael’s tent trying to hunt down Sisera. Jael called to him, “Hey, the man you’re looking for is in my tent.” Barak, a little confused, bolted inside, and there was Sisera, God’s enemy, dead.

After this Deborah and Barak sang a victory song… “Warriors were scarce, until you arose, Deborah — a motherly protector. And the most rewarded of women should be Jael. May all your enemies perish, God! But may those who love You shine like the rising sun at its bright, bright, brightest!”

After this, there was peace and no more fighting in the land for forty years.