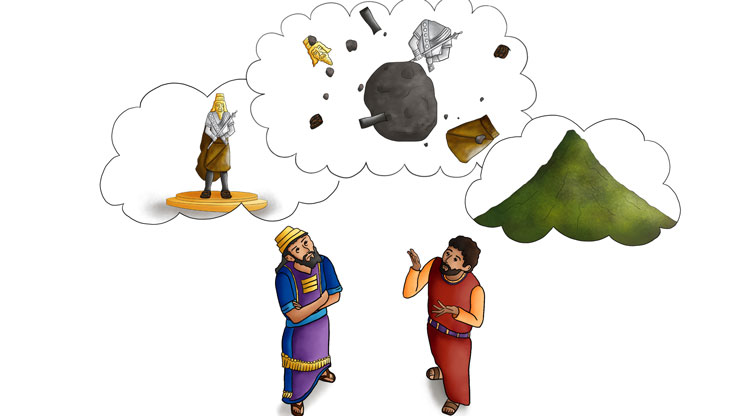 The next day, he called some of his special, smartest servants and said, “I’ve had an important dream and I really want to know what it means.”

The smart men said, “Tell us your dream, and we will tell you exactly what it means.”

But the king said, “I need to know if you are all really as smart as you say you are. I know how to tell if you’re as smart as you say you are! I am going to keep my dream a secret and I want YOU to tell ME the dream I had last night and what it means. If you can tell me this, then you will get a big reward. If you can’t, then I will kill all the special, smart men and smash their houses to bits.”

This made the special, smart men very afraid. They said, “O King, that is too hard. No person can ever tell another person what dream they had last night. That is impossible!”

This made the king very angry and he sent out the order that all of his special, smart men would be killed.

Now one of the king’s special, smart men was Daniel (the same Daniel who said, “No thanks” to tasty food). Daniel asked the king, “Your majesty, could I please have some time to tell you your dream and its meaning?” The king agreed and gave Daniel more time.

Daniel needed to hurry. But how would Daniel be able to know the king’s secret dream? He knew he wasn’t smart enough to figure it out. But Daniel was smart enough to know two super important things. First, he knew that only God could know the king’s dream and its meaning. Second, he knew that God listens when people who love Him pray and ask Him for help. So Daniel went home and asked his friends Hananiah, Mishael, and Azariah (who were also called Shadrach, Meshach, and Abednego) to pray for mercy from the God of Heaven so that they and all the other special, smart men could live.

And do you know what God did? That night, God gave Daniel the same dream that the king had! Then God told Daniel what the dream meant. Daniel and his three friends were so happy, happy, happy. And Daniel praised God’s wisdom saying, “Only You, God, know the deep and secret things. You know what is in the darkness, and light lives with You! You are so great for giving me an answer for the king.”

So Daniel was taken to the king. The king asked, “Are you able to tell me my dream and what it means?”

Daniel said, “Nope. That’s impossible. BUT there IS a God in Heaven who can. And He told me, so that I could tell you.”

Then Daniel told the king his dream.

King Nebuchadnezzar’s dream was about a large statue made of gold at the top, then silver, then bronze, then iron, then iron mixed with clay at its feet. And then a big rock hit the statue — Crash! — and broke it into many pieces. Then the rock turned into a very large mountain.

Daniel said, “The gold at the top of the statue is your kingdom. There will be many lesser kingdoms after you. Then one day, the rock will come and — Crash! — destroy all those kingdoms and become the mountain of God’s Kingdom, which will last forever and ever. There’s no doubt about it; this dream will come true.”

Wow! God had just given Nebuchadnezzar a little peek into His Big Plan!

The king was amazed at God. He shouted, “Your God is God of gods and Lord of kings because He even knows secret dreams!”

Then king Nebuchadnezzar made Daniel and his three friends in charge of the whole land.