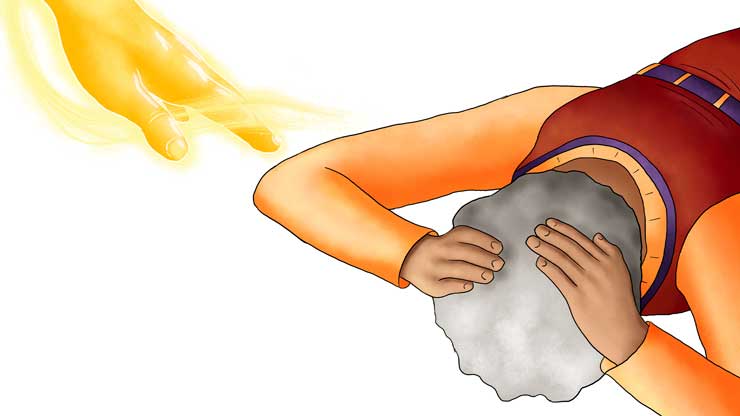 Made Strong and Calm by His Touch

Daniel : Made Strong and Calm by His Touch

By now, I imagine you know that sometimes God’s servants feel fragile or weak? Daniel went through some times like this. One time Daniel was very sad, and for three whole weeks he didn’t eat any yummy foods.

Then one day, Daniel was standing on the edge of a great river. He looked up, and there in front of him, was someone who looked like a man dressed in pure white clothing, with a belt of gold around His waist. His body was like yellow gemstones. His face like lightning. His eyes like flaming torches. His arms and legs like the gleam of polished bronze. And His voice… oh, His voice, like the sound of a whole crowd of people.

Daniel wrote, “I was the only one who saw it. Those who were with me didn’t see it. In fact, they were so afraid that they ran away and hid. So I was left alone, looking. I had no strength left, my face turned deathly white, and I was helpless. Then I heard Him speaking, and I listened to Him. I fell into a deep sleep, with my face to the ground.

A hand touched me and set me trembling on my hands and knees. He said, “Daniel, the Loved and Treasured, consider carefully the words I’m about to speak to you, and stand up. I’m here. I’ve been sent to you.” When He said this to me, I stood up shaking.

Then He continued, “Don’t be afraid, Daniel. Since the first day you started trying to understand and humbled yourself before God, your words were heard, and I took off in response to them.

“But I got held up in a big fight with the enemy — for three weeks! But Michael came to help Me. So now I’m here to explain to you some stuff that will happen in the future.”

While He was saying this, Daniel had bowed with his face to the ground and couldn’t say a word. Then the one who looked like a man touched Daniel’s lips, and Daniel opened his mouth and said, “I am really upset because of all of this, and I feel very weak. How can I, Your servant, talk with You, my Lord? My strength is gone. I can hardly breathe.”

The one who looked like a man touched Daniel again and gave him strength saying, “Don’t be afraid, you dearly loved and treasured man. Peace! Be strong now; be very strong.”

When He spoke, Daniel was strengthened and said, “Speak, my Lord, since You have given me strength.”

Every servant of God that looks strong like a superpower warrior to you, is really still a little child on the inside. A little child, who just like you, needs their Heavenly Father desperately. Because if you are someone who is giving all your strength for God, it can leave a deep hole in your strength that can really hurt at times. It can feel so painful that you can hardly breathe or move. This seems to be what Daniel is feeling. He’s admitting that he’s weak and frail before God. He didn’t pretend he was “fine” or “super strong.”

Daniel needed an encouraging voice to say, “You are loved and treasured by God.” Daniel needed a touch from God to calm his soul. And that’s okay. Our Heavenly Father takes care of us. But you have to be willing to face the deep hurt that comes when you give all your strength for His Big Plan. And trust Him for the “touch” of His strengthening and comforting hand right when you need it.

God’s messenger goes on to tell Daniel all about some fights between future nations and peoples. And how things in the world are going to get pretty tough. A horrible thing that destroys will be set in place.

“At that time, Michael, the great prince who watches over your people, will stand up. It will be a really stressful time, unlike any other. But all those whose names are found written in God’s Book will be safe.

“Many of those who are asleep in the ground will wake up to Forever life, and others to Forever shame. The wise will shine like the brightness of the heavens. And those who lead others into rightness, will be like the stars forever.

“So, Daniel, go ahead and close up all these things I’ve told you. They are for the end of time… right before all the clocks stop forever.”

Daniel watched as two others stood, one on each side of the river. One of them said to the man who was above the waters of the river, “When will these wondrous things happen?”

Then Daniel heard the man over the waters answer him as He raised both His hands to the sky. He said, “It is for a time, times, and half a time.”

Daniel heard what they said, but he didn’t understand. So he said, “Sir, how does it all end?”

But the messenger just said, “Go, Daniel. That’s all for now. These matters are closed and sealed up until the time of the end. Many will be made clean, but the wicked will go on being wicked.

“None of the wicked will understand, though the wise will understand. It’ll be a tough three and a half years and a really tough 45 days after that, but happy and blessed is anyone who waits and makes it to the end of the 45 days. But, Daniel, go your way. You will rest, and then at the end you will wake up to receive your reward.”

Now, I don’t know what all that means, but some say that the “time, times, and half a time” could be coming up here real soon. So, will you be someone who prays like Daniel prayed? Who cares like Daniel cared? Will you be a light in the darkness? Or will you cower fearfully in the corner? Nah… Let’s be those bright shining stars in the sky that help lead others to rightness!