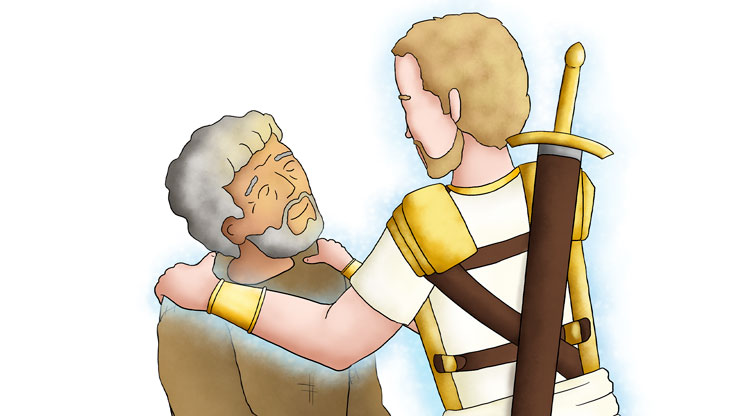 Loved and Treasured by God

Daniel : Loved and Treasured by God

Daniel had a pretty interesting life, didn’t he? Being taken from his home as a boy and made to serve a foreign king. Knowing the dreams of rulers. Getting thrown into a lion’s den.

But Daniel saw some wonderful things too… like God sitting on His throne. And that throne had wheels of fire! (I know you want to see that one day, don’t you? Maybe God’ll even let you sit in His lap and take a ride on it, or spin you around in circles on it.)

Daniel cared a lot about God’s words. He would read the written-down words of Heaven-Seers like Jeremiah. One day as Daniel read the scrolls, he read how Jeremiah had said that the discipline of God’s City would last for 70 years. And then Daniel realized it had been about 70 years since that discipline had started!

So do you know what Daniel did? He started praying about it. And not just praying, but Daniel stopped eating, put on scratchy clothes, and put ashes on his head.

Daniel knew it did make a difference. That’s how we join our hearts to God. We choose to love what He loves. To hate what He hates. To care about what He cares about and to talk with God as a person about things. God wants a relationship with us!

So, if you want a relationship with your Daddy in Heaven, let Him know you care about things He cares about.

Daniel wanted God to know that he really cared about the future of God’s Children. So Daniel took some words to God and prayed, “O Lord, great and awesome God who is true to His deal with those who love Him and keep His commandments — we have sinned! We’ve done what’s wrong and wicked. We have not paid attention to the people who have spoken for You, Your Seers.

“Lord, You are righteous, but I know You are also compassionate and forgiving. We have behaved terribly towards You. All of us broke Your law, and You disciplined us just like You told us You would starting way back in the time of Moses. But we still haven’t even said we’re sorry or tried to change. You are just and right in all You’ve done, but we have not obeyed You.”

Did you notice how when Daniel prayed about the sin of God’s Children, he said, “We have sinned”? Daniel was just a boy when this discipline of God’s nation had started. Why would Daniel take the blame for what his disobeying relatives did 70 years before? From everything that we know of Daniel, he seemed to be a pretty good guy, so why was he being so “hard on himself”?

Could it be that Daniel knew deep down inside that he was an empty person without God too (just like Isaiah had told them all many years before)? It doesn’t matter how many “right” things we seemingly have going for us; we all need compassion and mercy from God just as much as those “bad guys.” Because as you come to Know God, the more you See how other, other, other He is from us. He’s perfect and right in every way… and we are so… well… NOT!

And could it also be that Daniel could see that God always wanted and deserved a whole Family, a Nation, a People? And because Daniel was God’s friend, Daniel wanted God to have that — not just one guy’s love, but a whole Family.

Daniel knew all this wasn’t about just “him.” So Daniel took on the whole Family’s problems as his own problems and let himself be counted as one of the “bad guys.”

Daniel continued, “God, You made a great name for Yourself once before using us. Please don’t be angry with us anymore. Because of our sins, now everyone makes fun of us and YOU. So please God, accept my apology for all of us and hear what I’m asking, for Your own sake.

“Listen closely, my God, and hear! Open Your eyes and look at our ruined lands and the city called by Your name. It’s not because of our own good deeds that we are praying to You, but because Your love and compassion are so huge.

“O Lord, hear! O Lord, forgive! O Lord, pay attention, and do something! Don’t wait. For Your own sake, my God, don’t wait… because Your City and Your People are known to be Yours, they wear Your name.”

As Daniel was praying these things, a messenger from God named Gabriel showed up. “Hey Daniel, I have come to help you understand what’s going on. As soon as you started praying, a message went out, and I have come to tell you about it, because you are deeply loved and of great value in God’s eyes.”

Gabriel went on to tell Daniel even more things that would happen in the future (you can read about it in your Bible). But mostly I wanted you to hear that part right there when the angel said, “Daniel, you are deeply loved and treasured by God.”

Think about that. What did Daniel do that made him of great value to God? Why did God say that? Was it because Daniel was willing to get thrown into a lion’s den? Was it because he was willing to be counted as one of the “bad guys” with the Family? Or could it be that Daniel was feeling a little bit down right then and just needed to hear how much he was loved? It could be any of those things, huh?