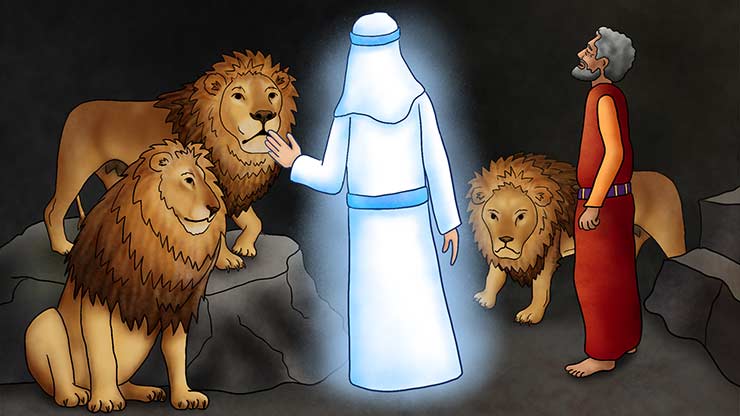 Gets Pet Lions, Instead of Getting Eaten

Daniel : Gets Pet Lions, Instead of Getting Eaten

King Darius was the new king of Babylon. Remember Daniel and his three friends who had come to Babylon when they were young? Daniel was still living in Babylon and he worked to help King Darius. Daniel served the Babylonians just like Jeremiah and Ezekiel said, accepting the discipline from God. And because he had been soft to God, Daniel was able to see with Heaven-Eyes and things were going very well for him.

There were 120 men helping Darius rule the kingdom, but God made Daniel stand out as special. Daniel was doing such an excellent job with his work, that the king wanted to make Daniel ruler over his whole kingdom! Wow! The king trusted Daniel a lot to give him all that responsibility.

But some of the 120 other men got very jealous of Daniel. They didn’t like that Daniel was going to get a bigger, better job than they had. They were angry that the king liked Daniel so much.

The jealous men huddled all together and said, “We have to find something that Daniel is doing wrong. Then we can tell the king, and Daniel won’t get to be ruler.”

All they saw was that three times a day, Daniel got on his knees to talk with God.

Now the men were really frustrated. They all huddled together and said, “We will never find anything wrong with Daniel! The only way we can get him in trouble is if we have a rule about not praying to His God.” So they made a nasty plan.

They went to King Darius and tricked him. “O King,” they said, “we all think you should make a new rule. Make a rule that for 30 days, people have to pray to you. And if they pray to God, they will be thrown into a den of lions.” If Darius had known they were trying to hurt Daniel, he wouldn’t have done it. But the king was foolish, and made it a rule that couldn’t be changed.

As soon as Daniel heard about the rule, do you know what he did? He went straight to his room, and got on his knees to talk with God — even though he knew that could make him get thrown into the lion’s den.

Was he super brave? Maybe, but more than that, he was seeing things with Heaven-Eyes. He could see that God was still the King over all the kings. He knew God could help him. And he knew that even if he did get eaten by lions, God’s Plan would still happen. The main thing on Daniel’s mind wasn’t the danger of the lions. The most important thing to Daniel was always God. So Daniel looked out his window and talked with God about God’s Plan and God’s City, and asked for God’s help.

The other men were watching, and when they saw Daniel talking to God, they ran and told King Darius, “O King, didn’t you make a rule that people can only pray to you? Daniel didn’t pay any attention to you or the rule! He keeps praying to God!”

Darius realized the men had tricked him to hurt Daniel. He was very upset, because even though Darius was king, the rule was the kind that not even the king could change. He tried and tried and tried all the rest of that day to figure out how to change the rule. But he couldn’t rescue Daniel. Finally, they took Daniel to the lion’s den.

“Daniel,” King Darius said, “the God that you are always serving will rescue you.” Then the men threw Daniel in.

Darius was so worried that night, that he didn’t want to eat anything. He couldn’t sleep. He kept thinking about Daniel. As soon as the sun shone in the morning, he ran to the lion’s den as fast as he could. “Daniel!” he yelled. “Daniel, the servant of the Living God! Was your God able to rescue you?”

And Daniel answered him! “O King, my God sent His angel and kept the lions’ mouths shut so they could not hurt me, because He saw that I had done nothing wrong against Him. And I have done nothing against you, either, my King.”

King Darius was so, so, so happy. “Pull Daniel up out of the lion’s den right away!” he ordered.

But the men who had tried to hurt Daniel — the king threw them into the lion’s den instead, and the lions ate them up.

Then Darius sent a letter to his whole kingdom. It said, “Everyone, respect and honor the God of Daniel! He is the Living God. His Kingdom will not be broken. He lasts forever. His authority lasts forever. He rescues and saves and does impossible, wonderful things in the heavens and on the earth. He has rescued Daniel from the lions!”

Darius was the third Babylonian king that Daniel had served! Do you remember that we told you that Daniel would serve four kings? Well, very soon, a king named Cyrus will become king. And, when that happens, stuff’s gonna get better!!