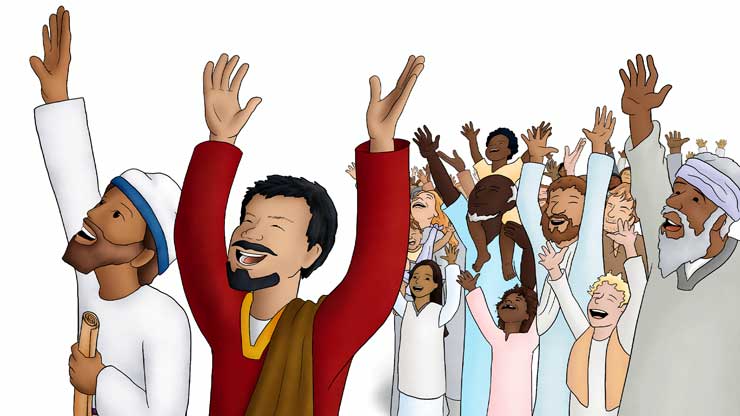 The Joy of the Lord is Your Strength

Celebrate : The Joy of the Lord is Your Strength

Finally the wall was finished! Jerusalem’s wall was big, strong, and protective. And it was completed in just 52 days! When the enemies heard that it was done, they were shocked and afraid because they realized that this “impossible” work had been done with the help of God Himself.

Sometime later, early one morning, all God’s Family came together as one.

The people said, “Ezra, would you please go get the book of the Law, the book that God gave Moses that tells us all the things that God wants us to do to make Him happy?”

Ezra brought out the book and when he opened it, the people stood up on their feet. Ezra praised God and all the people yelled, “Amen! Yes! Amen!” and reached their hands high into the air towards God. And then they all got down on their knees with their faces to the ground, and told God just how wonderful He is, how good He had been, and how forgiving and loving.

Ezra started reading God’s Law early that morning and read and read and read — until lunchtime! All the men, women and children stood and listened to what Ezra and the other leaders were reading! They didn’t want to miss a word! They wanted to know and understand God’s Word.

Ezra and the Levites explained to the people all the laws God had given, and when the people heard and understood God’s words, they began to cry.

But Nehemiah told them, “Don’t be sad and cry. This day is holy. Go and enjoy yummy food and sweet drinks, and send some to those who have nothing. Help each other celebrate! Don’t be sad, for the joy of the Lord is your strength.”

The other leaders helped calm all the people down, saying, “Quiet your hearts. Be still, for this is a holy day. Don’t cry.”

So all the people went away to eat and drink, to share their food, and to celebrate with great joy, because they now understood the words that had been made known to them.

Have you ever felt like crying when someone corrects you or shows you what God thinks about something you’ve done wrong? Me too. And it’s okay to be sad for a little while when you sin. But when God makes known to you things in His heart and helps you understand Him a little bit better, even if it means you’ve been doing something wrong and need to change, then that is still reason to celebrate with joy! Be glad to learn what God wants! Celebrate it and then go on to do something about it, which always happens best with a joyful heart.

The people had just heard in the Law about God’s Parties, and they realized it was time for the Feast of Tabernacles. And they didn’t want to just read about it. They were going to do it! So they went out right then and cut branches and made little shelters to stay in while they celebrated. And every single day they kept reading God’s Laws together.

Not long after this all the people gathered together as one again. They told God how sorry they were for all the ways they had sinned against Him. They worshipped God and said aloud all the ways He had cared for them and rescued them.

Then they made a fresh covenant, promising God that they would hold tight to Him and to all that they’d been reading in His Laws. They wrote their promises down on a scroll. It said, “We will obey carefully all God’s commands. We will stay set apart for Him. We will bring our sacrifices to Him. And we will NOT neglect the House of our God.”

Ezra, Nehemiah, and all the leaders signed their names to the promises.

It had been a long, long time, but finally, the people were home, standing as one — with an understanding of God’s Word and hearts eager to obey.

And it wasn’t long, until God’s City was filled with more and more houses and people.

God brought some life from that pile of dust! (That’s why we should never look down on small beginnings.)

God’s Walls of safety around His City are an important thing, huh? Look what happens when willing hearts are ready to do the work and defend the walls, with God’s Spirit and the Gifted Leadership He provides. God’s City can thrive and flourish with those Walls of safety standing strong and tall around it.

But, we’ll never see that City with its walls, if we aren’t willing to defend it — even in those small beginnings…