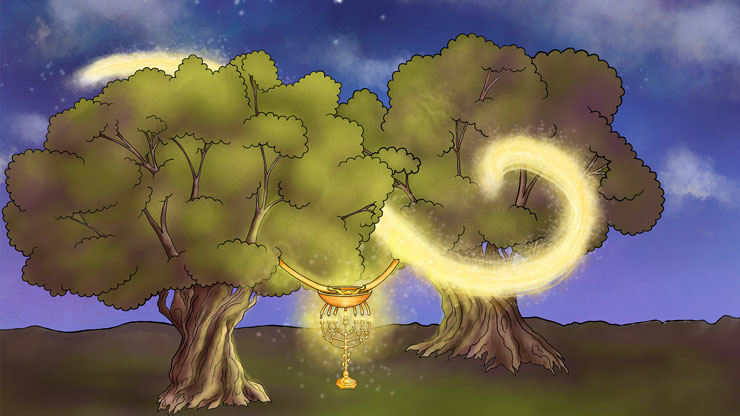 Not By Strength or Power But By God's Spirit

Building God's House : Not By Strength or Power But By God's Spirit

Once the people were back at work on God’s House, one night an angel woke Zechariah up and said, “Wake up! Wake up! Look! What do you see?”

Zechariah said, “I…I see a lampstand made of pure gold, with a bowl for oil on the top. There are 7 lamps, each with a pipe connected for its oil. There are 2 olive trees — 1 on each side of the bowl, giving it a constant supply of oil to keep it lit.”

The angel asked Zechariah, “Do you know what these things mean?”

So the angel told him, “It is a picture-message for Zerubbabel. God is saying, ‘Not by might, power, numbers or strength, but by My Spirit.’”

God wanted to get Zerubbabel the message that it wasn’t how strong or powerful they were that mattered when building God’s House. That wasn’t how they were going to get the job done. The job would be done by God’s Spirit. God’s oil flowing from the 2 trees would keep those lamps lit. The 2 olive trees would keep the olive oil constantly flowing so that the lights would shine and keep on shining.

So even though the work on God’s House may have felt slow, or hard, or just kind of unimpressive, God was encouraging Zerubbabel with, “Don’t look down on this seemingly small start. Because the small beginnings, the little things, are gonna be GREAT BIG things by the time I AM finished with them by My Spirit.”

And that wasn’t just a message for Zerubbabel. We should all learn from that. When it comes to God’s work, no one should “judge” something as too small. God’s work doesn’t always start with the big, flashy stuff. But no matter what, it is NOT our job to try to “make something happen” or “build something big” for God. It’s not our strength or power or might that matters one bit. It’s God’s Spirit alone that will get the big stuff done, in His own timing and way. Just you watch and see.