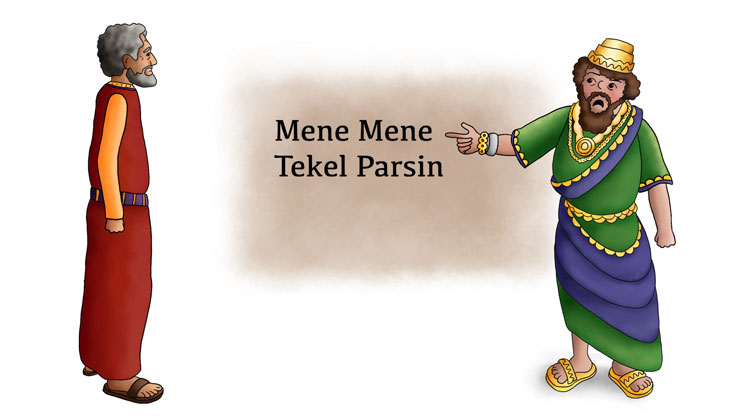 The Writing on the Wall

Belshazzar : The Writing on the Wall

Have you ever written on a wall? I bet you got in trouble for that, didn’t you? Well, did you know that one time GOD wrote on a wall? (He’s God, so He can do whatever He wants.) And this was a very important message He was writing.

After Nebuchadnezzar died, his son Belshazzar became the king. One night King Belshazzar had a big fancy dinner for 1,000 royal guests!

He gave orders to bring the special gold and silver cups that his father Nebuchadnezzar had take, take, taken from the Temple in God’s City. Then, King Belshazzar and his royal guests drank from those cups that came from God’s House. As they were drinking, they praised their false gods. That was very offensive to God.

Suddenly the fingers of a person’s hand appeared out of nowhere and began writing on the wall! All the dinner guests could see was a hand!

The king called for the magicians, wise men, and wizards of Babylon and said to them, “Anyone who can read this writing and explain it will receive purple clothes and a gold necklace. And I will make that person the 3rd highest ruler in the kingdom.”

Then the king’s mother, who had heard the voices of the king and his royal guests, came into the banquet room. She said, “O King, live forever! Don’t be afraid or let your face be white with fear! When your father was king, there was a man named Daniel who could understand things like this. He was very wise and had knowledge and understanding. He could explain dreams and secrets, and could answer very hard problems. Send someone to get Daniel. He will tell you what the writing on the wall means.”

So they brought Daniel to the king, and the king asked, “Is your name Daniel? Are you one of the captives my father the king brought from Jerusalem? I’ve heard that God is with you, and that you have extraordinary understanding. The wise men and magicians could not explain this writing on the wall to me. But I have heard that you’re able to explain what things mean and can find the answers to hard problems. Read this writing on the wall and explain it to me. If you can do it, I will give you purple clothes fit for a king and a gold necklace to wear around your neck. And you will become the 3rd highest ruler in the kingdom.”

Then Daniel answered the king, “You can keep your gifts for yourself, or you may give those rewards to someone else. I don’t really care about those. But I will read the writing on the wall for you and explain to you what it means.

“O King, the Most High God made your father Nebuchadnezzar a great, important, and powerful king. But your father became too proud and stubborn, so God brought him down low. Your father, Nebuchadnezzar, had to live by himself outside with the animals, and he became like an animal. Remember? Shew!

“Those things happened to him until he learned the lesson that the Most High God rules over every kingdom on earth, and HE puts anyone HE chooses over those kingdoms.

“But, Belshazzar, you already knew these things because Nebuchadnezzar was your dad! He told you about these things. He warned you! But you didn’t learn from your father’s mistakes. Instead, you have set yourself against God. You ordered the drinking cups from the Temple of the Lord to be brought to you and you drank from them when you knew they were His. You even praised fake gods. You did not honor the real God, who has power over your life and everything you do. So, God sent the hand that wrote on the wall.

“These are the words that were written on the wall: ‘Mene, mene, tekel, parsin.’ This is what the words mean: Mene: God has counted the days until your kingdom will end. Tekel: You have been weighed on the scales and found not good enough. Parsin: Your Babylonian kingdom is being divided and will be given to the Medes and the Persians.”

Then Belshazzar gave an order for Daniel to be dressed in purple clothes and to have a gold chain put around his neck. He declared Daniel to be the 3rd highest ruler in the kingdom, just as he had promised.

But later on that very same night, Belshazzar, king of the Babylonians, was killed. Then Darius the Mede became the new king.