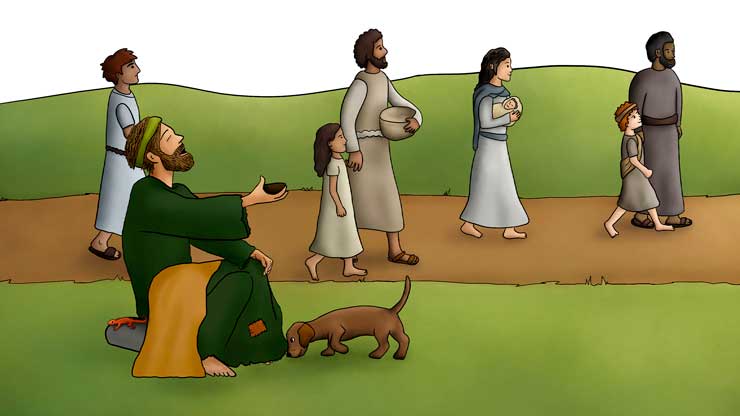 Asks and Keeps on Asking

Bartimaeus : Asks and Keeps on Asking

There was a blind man named Bartimaeus who lived in a town called Jericho. Being blind meant that the whole world looked black to Bartimaeus, all the time. Even on the sunniest, brightest, most beautiful day, all Bartimaeus could see was blackness.

Because Bartimaeus was blind, his only way to make money was to sit by the side of the road and beg from people walking by. So every day, he would sit by the road, asking for money and listening to people as they walked by.

So Bartimaeus shouted out into the crowd, “What’s going on? Why are there so many people?”

Someone shouted back to him, “Jesus is walking through the town!”

When Bartimaeus heard that, he got very excited too! He had heard about Jesus and the miracles He had done, and he believed!

Well, “Son of David” was a name that came from something the prophet Isaiah had said a long, long time before. He had said that one day a Rescuer was coming to save people. And the Rescuer, the Savior, was going to be a descendant of King David.

So when Bartimaeus called Jesus the “Son of David,” it was his way of saying, “I know You are the Messiah, the Savior of the world that we’ve been waiting for for so long!”

But the people around Bartimaeus were annoyed by his shouting. And so they shouted back at him, “Shhhhh! Be quiet! Jesus doesn’t want to hear from you. Just go back to begging on the street.”

Does that remind you of anything Jesus has said before? Remember when Jesus was on the mountain, teaching the people, and He told them, “If you want something, ask and keep on asking God, and He will hear you. Seek and keep on seeking, and you WILL find Me.” Well, that’s what Bartimaeus was doing! He knew he needed Jesus’ help, so he just kept asking and asking Jesus to help him.

As Jesus was walking along the road, he suddenly stopped. He said to those around Him, “Wait, I hear a man calling My name. I hear him calling out to Me again and again. I can hear in his cries that he believes who I am and he needs Me. Call that man who is shouting for Me and help him get to Me through this crowd.”

So Jesus’ friends went right away to find Bartimaeus. When they found him, they took him gently by the arm and said, “Cheer up! Get up on your feet! Jesus has heard you and is calling for you!”

Bartimaeus jumped up onto his feet, leaving his coat on the ground. He was smiling from ear to ear.

When Bartimaeus got to Jesus, Jesus asked him, “What is it that you would like Me to do for you?”

Bartimaeus dropped to his knees at Jesus’ feet and said, “O Master, I want to be able to see!”

Jesus was full of compassion for Bartimaeus. He touched Bartimaeus’ eyes and said, “Yes, your faith has healed you.”

As soon as Jesus touched his eyes, it was like a curtain was opened in a dark room on a bright sunny morning! Light flooded in! Bartimaeus could see!

Before, he could only see blackness everywhere. But now he could see the sky and the trees and streets and all the people. But best of all, Bartimaeus could see Jesus.

Jesus said to Bartimaeus, “You can go home now.”

But Bartimaeus didn’t want to go home! He wanted to be with Jesus. And so that’s what he did. He stayed right by Jesus the rest of the day and walked with Him everywhere He went.