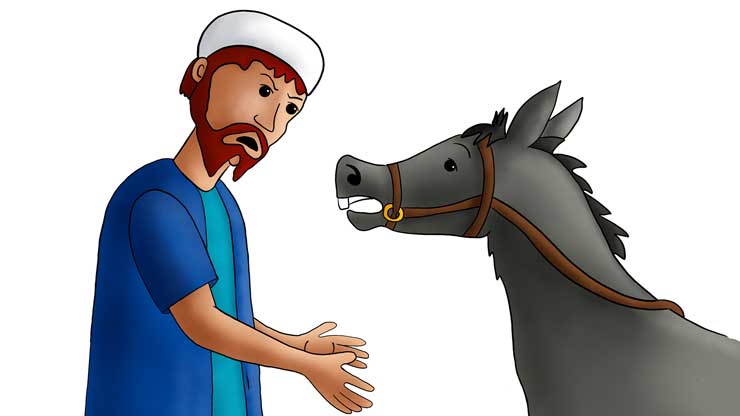 The Man Who Thought He Could Obey “Just Enough”

Balaam : The Man Who Thought He Could Obey “Just Enough”

While God’s People were wandering, wandering, wandering in the wilderness, they came close to the land of an enemy king. This king was very afraid of them because he knew about the amazing things God had done for the people, and that they had won every battle they fought. The king wanted something bad to happen to the people of Israel so they couldn’t take over his land. So he told his servants, “Go find Balaam!”

Who was Balaam? Well, the enemy king thought Balaam was a powerful guy. If Balaam blessed someone, then it would happen. If he cursed someone, then that would happen too. Balaam knew God was strong and powerful, and that He should be obeyed. But if God loved something, Balaam didn’t really care. If God didn’t love something, Balaam didn’t really care. If God told him to do something, Balaam would obey God just enough to not get in trouble, but he didn’t love God. Balaam mostly just wanted to do what he wanted… and Balaam loved money. All this, made Balaam a creepy, greedy guy.

So the enemy king’s servants found Balaam and told him that the king wanted him to come and curse God’s people. They showed him some money the king would give him for a reward if he did.

Balaam told God, “God, there’s this group of people nearby. This king wants me to say something bad about them…”

God stopped him right there, “Hey! Those are MY People! No one can curse them, because I have blessed them.”

So the servants went back and told the enemy king Balaam wasn’t coming. But the king tried again. He sent very important men to Balaam this time.

The important men said, “Balaam, the king says he’ll give you anything you want for a reward, if you just come with us and say something bad about God’s People.”

Balaam answered, “Sorry, can’t come. God said I can’t say anything bad about His People. If God says I can’t, well, I just can’t! Even if the king gave me ANY reward I wanted.”

Later that night, God said to Balaam, “Balaam, you can go with them, but don’t you dare say anything I don’t tell you to say.”

Balaam really did want to go, because he really wanted that reward from the king. He didn’t really care what pleased God. He wanted to obey God just enough to not get in trouble with God, but he didn’t love God.

He went to the important men and said, “Actually, I will go with you.” So, Balaam saddled up his donkey (hee-haw, hee-haw) and went with the men.

But as God watched Balaam hop up on his donkey with a spring in his step, and a little smile on his face, God’s anger started getting hotter and hotter. God knew Balaam wanted to go meet the enemy because he still greedily hoped to get a reward for himself.

So God sent an angel to stand in the road to block Balaam’s way. Balaam was being so greedy, he couldn’t even see the angel!!! But guess who could see the angel?

Balaam’s donkey saw the angel standing in the road with a drawn sword in his hand. The donkey bolted off the road into a field (hee-haw, hee-haw), but Balaam hit it to make it get back onto the road. Whap! Whap!

Then the angel stood in a narrow part of the road between two vineyard walls. When the donkey saw the angel, it tried to squeeeeeeeze by (hee-haw, hee-haw), but it smashed Balaam’s foot against the wall. OUCH! So Balaam hit the donkey again. Whap! Whap!

Then the angel moved farther down the road and stood in a place too narrow for the donkey to squeeze by at all. This time the donkey just laid down in the middle of the road. (hee-haw, hee-haw)

Balaam got so mad. Why would his donkey not move? He started having a temper-tantrum, hitting and hurting his poor donkey! Whap! Whap!

So God let the donkey TALK! “WHY do you keep hitting me?” the donkey asked Balaam.

“Because you’re embarrassing me!” Balaam answered. (He didn’t even seem to notice that it was odd for the donkey to be talking!)

The donkey replied, “But I’ve been your donkey your whole life! Have I ever done anything like this before?”

Balaam thought for a moment, “Well, no, I guess not.”

At that moment, God opened Balaam’s eyes to see the angel who had been blocking the way that whole time. Balaam, shocked and frightened, dropped to the ground on his face!

Then the angel from God spoke, “Why were you hitting your donkey? Your donkey saw me and was obeying me, but you weren’t! I came out to stand in your way because God is not happy that you are going to help the enemy king. If you had forced your donkey to keep going past me, I would have killed YOU and let your donkey live!”

Balaam mumbled from the ground, “I have sinned. I didn’t realize you were standing in the road to block my way. I’ll turn around if you don’t want me to go.”

“You can keep going,” the angel said, “but you will only be allowed to speak what God says.”

When they finally made it to the king, the king asked Balaam three different times to say something bad about God’s Children. But when Balaam opened his mouth, God made Balaam say something good about His Children. Because if God wants Good to be said about His children, then in the end THAT’s what’s going to happen — even if a creepy, greedy guy tries to say the opposite. Not only that, but God made Balaam’s mouth say bad stuff would happen to the enemy king! As you could guess, the king was super mad about that. But Balaam didn’t say anything God did not tell him to say.

You’d think Balaam would change after THAT happened, wouldn’t you? But no. Remember how we said that Balaam obeyed God, but only the littlest amount he had to to stay out of trouble?

Well, as often happens (even today), since Balaam had it in his greedy heart to want that reward, he found himself a way to get it.

Not long after that, he went back to the enemy king and told him a little secret of how to hurt God’s Family. He told him to try to trick them into doing something bad.

Balaam told the king, “Invite them to a big party with some false-god-worshipping women.”

Sadly, Balaam’s trick worked and it was about to hurt a lot of people.