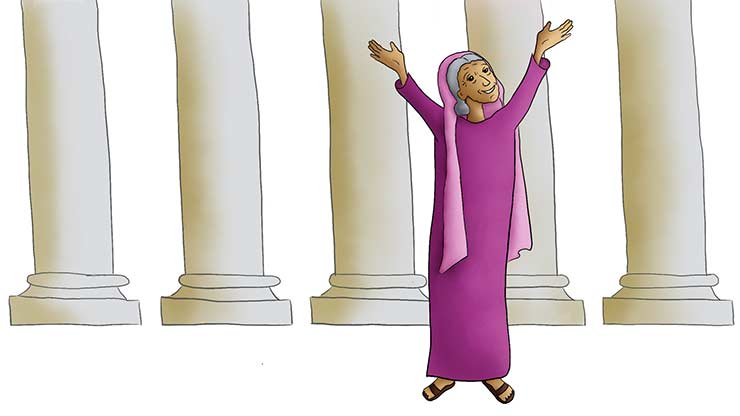 The Woman Who Worshipped Day and Night

Anna : The Woman Who Worshipped Day and Night

Anna was a very old lady at the time when Jesus was born. She was a prophetess (that’s a lady who is a prophet). Her husband had died when she was a young lady and she had been alone for a long, long time.

Her life was worshipping. When she saw a beautiful bird in the sky, she knew that it was a shadow of something in the unseen world, and she thanked God for it.

She would take the time to look around and notice God’s creativity in creation. When she saw the wind blowing through the trees and the little bug crawling in the dirt, she would stop and look at the details. Then, she would talk to her Daddy in Heaven about it. Telling Him how cool and awesome He is. She would stop to smell the flowers, and would notice how each one smelled different. She noticed these things and she let all these things deepen her life with God.

Anna also knew God’s Word. She knew that a long time before then, God had promised that one day God would send a special Rescuer, a Savior for people dying in sin and pain. So, when she saw someone hurting she would turn to God and pray for them. She knew that God had big plans coming soon for anyone who would Trust Him.

But whether Anna felt excited or aching for the Rescuer, every day she would ask God to send His Rescuer, the Savior, soon! She knew God would keep His promise!

One day, as Anna was worshipping God, she saw a man and his wife in the Temple with their baby.

As soon as Anna saw the baby, she knew that all her prayers had finally come true! She knew that this baby was the Rescuer that God had promised. Anna was so excited! She ran over to Mary and Joseph and the baby, Jesus (that’s who it was of course).

She began singing and dancing and thanking God with all her heart. Then Anna went around the temple telling everyone who would listen that this baby was the Messiah, the Rescuer, the Savior that God had promised to send!