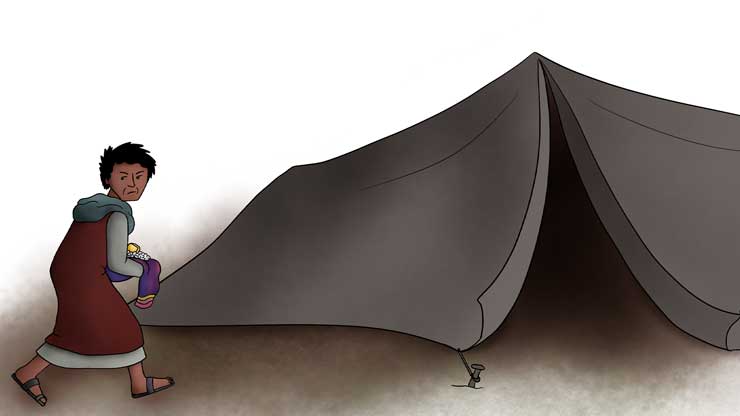 The Man Who Tried to Hide His Sin

Achan : The Man Who Tried to Hide His Sin

God’s Army under Joshua had just won at Jericho by God’s Mighty Hand. The army was now ready to take over the entire land of Canaan. God promised that if they would obey Him, they would always have victory. They had waited so long. Now, after God’s big win at Jericho, they were eager for the next battle.

Joshua sent some men from Jericho to scout out the next target, a small city called Ai. When they came back, they told Joshua that since Ai was such a little tiny place, there was no need to send the whole army.

So Joshua agreed and only sent about three thousand men to fight. But the battle went very badly for God’s Army.

It was awful! The soldiers from Ai chased God’s Army away and struck down 36 of them. At this news, God’s Army melted in fear! Yikes! What had gone wrong?

Joshua and some of the other leaders tore their clothes, sprinkled dust on their heads and fell facedown to the ground before the Ark of the Lord. They stayed down on the ground like that all day.

Joshua cried to God and said, “Powerful Lord, why did You bring Your people across the river so that our enemies could destroy us? Now the other people in this country will hear about us losing the battle and will wipe us out. Then what will You do for Your own great name?”

But the Lord said to Joshua, “Why are you down on the ground crying like that? Stand up! God’s Army has sinned. They disobeyed My covenant by taking some of the things from Jericho that I told them to throw away. They have stolen. They have lied. They put those things with their own stuff. That’s why you all lost the battle. I will not be with you anymore unless together you find those things and destroy them like I told you before.

“In the morning, I want you to have everyone come and stand before Me in groups of their tribes and families. I’ll show you who it is and the lying thief will be punished because he has violated the covenant of rules and has done a terrible thing!”

So early the next morning, Joshua had the people come forward and stand in groups. No one but God knew who the thief was (and of course, the thief himself knew).

Joshua said to Achan, “Give glory to God and honor Him. Tell me what you did. Don’t try to be sneaky about it anymore.”

Achan replied, “It’s true! You’re right. I have sinned against God. When I saw the shiny gold and pretty clothes, I wanted them, so I took them. Then, I hid it all in the ground inside my tent so that no one would see it.”

What was Achan thinking? Did he REALLY think he could hide stuff in the ground and God wouldn’t know? He probably thought to himself, “No one will know. I won’t be hurting anyone if I just take a few things. And even though I know it’s wrong, I won’t be hurting anyone except me.” Wow! Achan was sure wrong about that! What he did had caused many people to die. And, it caused God’s whole army to lose the battle they were fighting.

Some messengers ran to Achan’s tent, and there it was, hidden in the ground. They took the things from the tent, brought them to Joshua and spread them out before the Lord.

Then Joshua, together with all God’s community of people, took Achan, all the shiny gold and pretty clothes he stole, all his children, all his animals, his tent and all that he had, to a valley. Joshua said, “Why have you brought this trouble on us? The Lord will bring trouble on you today.” Then together, the people destroyed Achan and all his stuff.

Then God said to Joshua, “Don’t be afraid; don’t lose courage. Take the whole army with you, and go up and attack Ai again. For I have delivered into your hands the king of Ai, his people, his city and his land. Do to Ai and its king just as you did at Jericho, except this time you can take the shiny gold and pretty clothes for yourselves.”

There are many things to be learned from Achan’s sin — like don’t disobey and don’t steal from God. But, maybe most importantly, never, ever, ever hide sin. Not only will it be found out sooner or later, but hidden sin not only hurts you, it keeps God’s whole Family from victory in their battles, too. If there is sin hidden in God’s camp, it hurts all of God’s Family, His Whole Army!